CAF CL: We are ready for Kadiogo on Sunday – Richard Boadu 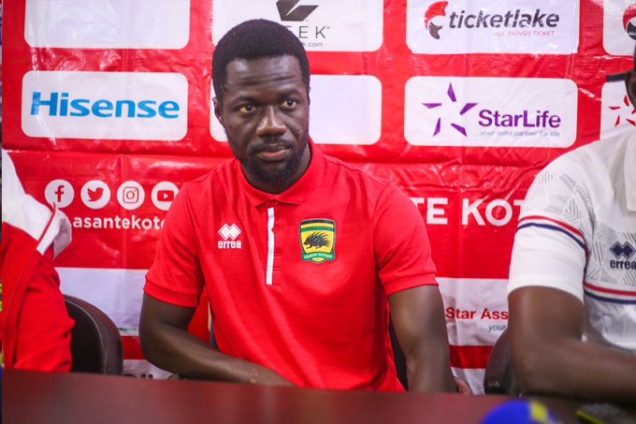 Asante Kotoko captain, Richard Boadu, says his side is ready for the game against RC Kadiogo in the preliminary stage of the CAF Champions League.

The Porcupine Warriors will host the Burkina Faso club on Sunday, September 18, at the Baba Yara Sports Stadium for the second leg.

Kotoko were victors in the first leg which took place in Benin on Monday with youngster, Isaac Oppong scoring late in the game to give the Ghana Premier League champions a 1-0 win.

Speaking during the presser ahead of Sunday’s game, Boadu admitted the game won’t be a walkover but his side will be well-prepared.

“Sunday’s game is very important for all of us and we know it’s not going to be easy but we are ready for it,” Boadu said.

“We all read about the history [of Kotoko in the Champions League], however, this is our time to also make history and for us as players, our immediate target is to reach the group stage. The coach has been fantastic and he relates very well with us.”

Sharing his thought on what the fans should expect, head coach, Seydou Zerbo added, “This is a press conference and I won’t sit here to tell you the system we are going to deploy so you just have to come on Sunday and see how we will play.”

DISCLAIMER: The Views, Comments, Opinions, Contributions and Statements made by Readers and Contributors on this platform do not necessarily represent the views or policy of Multimedia Group Limited.
Tags:
Asante Kotoko
Caf Champions League
RC Kadiogo
Richard Boadu