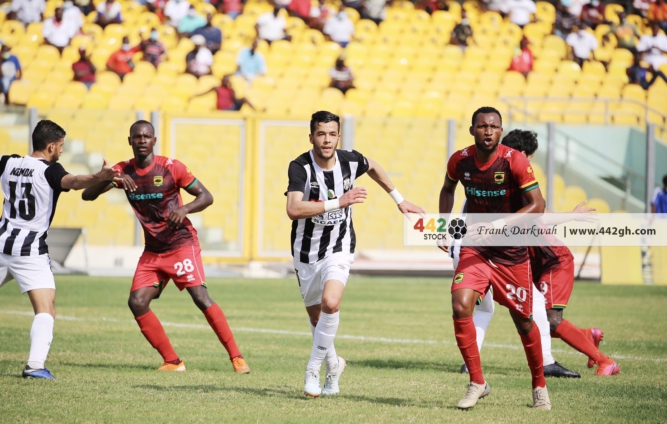 Asante Kotoko need a miracle in Algeria to progress to the Caf Confederation Cup group stage after they were beaten by ES Setif at the Accra Sports Stadium on Sunday.

The Algerians came from behind to beat the Porcupine Warriors 2-1 in the first leg of the play-off tie.

Kotoko looked on course for a famous win when their top striker Kwame Opoku gave them a deserved lead but Setif fought back to score two goals to turn the tie in their favour.

The defeat is a difficult result for Kotoko, who were on top for the most part of the game. A draw would have been favourable, but they have Naby Keita to blame for wasting a late penalty.

Setif decided to sit deep and play on the counter-attack, thereby allowing Kotoko to dominate proceedings. They were the dominant side in the first 45 minutes but could not score.

In the second half, Kotoko with the lots of possession took more risk in their bid to break the resolute defence of Setif. The pressure paid off in 68th minute when Kwame Opoku scored after a brilliant play.

Setif abandoned their strategy and pushed men forward after conceding. They grabbed the equaliser in the 73rd minute through Mohammed Amoura. The forward, completely unmarked in the box, beat Razak Abalora with a wonderful header.

It was a huge blow for Kotoko and they failed to recover as Setif scored the crucial second. Midfielder Ahmed Kendouci finished off a swift attack which started in their own half.

Naby Keita won a penalty few minutes into stoppage time when his shot hit the hand of Setif defender. The Guinean, who has a good conversion rate from penalties, elected himself but this time missed as Setif goalkeeper pulled up an impressive save.

The result means Setif have a huge advantage heading into the second leg which will come off on February 21 at the 8 May 1945 Stadium in Setif.

Kotoko have little hope of progress, considering they haven’t enjoyed success in recent travels, especially in the north.

DISCLAIMER: The Views, Comments, Opinions, Contributions and Statements made by Readers and Contributors on this platform do not necessarily represent the views or policy of Multimedia Group Limited.
Tags:
Asante Kotoko
CAF Confederation Cup
ES Setif