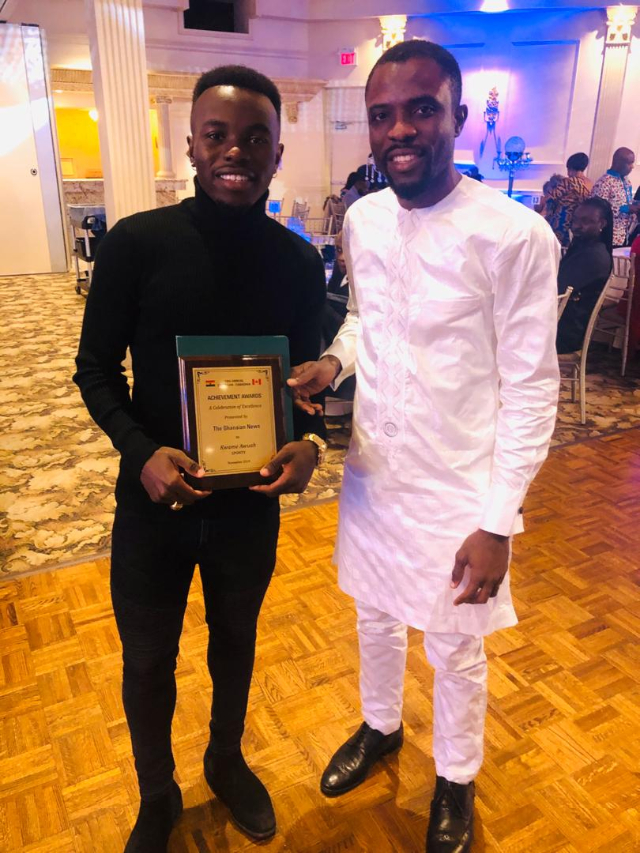 The winger was one of three in the Sports Category on the night after that historic feat.

Awuah was key for the Hamilton-based side who dispatched Cavalry FC-based in Calgary in a two-legged final to become champions.

”It feels absolutely amazing to be recognized by the Ghanaian Canadian community this year at this unbelievable event last night. It’s truly an honour and a blessing to realize that what we’re doing as individuals can bring a whole group of people together and assist in pushing each other to achieve excellence in every field,” he told Joy Sports.

The 23-year-old was joined on the rostrum alongside Matthew Boateng (American Footballer) and George Marfo (Sports Journalism) in the Sports Category.

”This award just motivates me more to not only continue what I’m doing but to become better at it. To Train harder, be a better person, focus more and have more fun while doing it. Next season should be a fun one and it’s even better knowing I have my own people supporting me.”

Awuah was a firm staple for By Smyrniotis’ side in maiden Canadian Premier League as he made 27 appearances (including 22 starts). But his career started playing for the Ontario provincial program and the Dante Alighieri varsity boys soccer team, for which he was elected MVP. In 2013, he graduated from the Sigma FC Academy program.

He won many awards during his time there, including being selected to the American Athletic Conference First Team multiple times.

Awuah-who can play as a left-back, a centre midfielder, and a left-winger-cherishes this recognition by the Ghanaian community in the Maple Leaf Country.

He added: ”My family is ecstatic and my friends are happy for me as well. This is a big achievement that I’m going to cherish and enjoy for the rest of my life.

”I’m lucky to be doing what I do for a living and it’s only right that I enjoy it all with the people who have supported me all my life and career.”

The former New York City FC player- drafted in the first round of the MLS SuperDraft-sixteenth overall.

He made a total of ten appearances for Patrick Vieira’s side before being released at the end of the 2018 season.

In February 2019 Awuah signed with Forge FC and after a successful campaign, he is brimming with confidence the Canadian Premier League will come on in leaps and bounds.

”The future of the Canadian Premier League is bright, but it’s going to take even more work than what has happened this year. This year was just a glimpse of the amazing future of Canadian soccer.

”It’s going to take everyone involved: players, coaches, GMs, owners, communications, media, front offices, Commissioner, Canadian Soccer Association, the fans to continue steering this ship in the right direction. If we all believe in the sport in this country, then the sky is the limit!.”

Awuah has played for Canada’s U23 side and was named in the provisional squad for the 2017 CONCACAF Gold Cup.

DISCLAIMER: The Views, Comments, Opinions, Contributions and Statements made by Readers and Contributors on this platform do not necessarily represent the views or policy of Multimedia Group Limited.
Tags:
Canadian League
Kwame Awuah