Canadian PM Justin Trudeau violated federal conflict of interest rules in the handling of a corruption inquiry, the federal ethics tsar has found.

The prime minister says he accepts the commissioner’s report but disagrees with some of its conclusions.

The findings could be an issue for Mr Trudeau in advance of October’s general election.

Earlier this year, former justice minister and attorney general Jody Wilson-Raybould accused Mr Trudeau and his staff of spending months trying to convince her that taking SNC-Lavalin to trial would cost Canadians jobs, and their party votes.

Her accusation proved to be politically costly for Mr Trudeau – leading to the resignation of two high-profile cabinet ministers, his top personal aide and the head of the federal bureaucracy – and cast a shadow over his leadership.

Ms Wilson-Raybould said the commissioner’s report was a “vindication” of her position that she was improperly pressured by Mr Trudeau and his staff.

What did the ethics commissioner report say?

“The Prime Minister, directly and through his senior officials, used various means to exert influence over Ms Wilson”‘Raybould,” said Mr Dion in a statement released with his 63-page report on Wednesday.

He said the authority of the Mr Trudeau and his office “was used to circumvent, undermine and ultimately attempt to discredit the decision” by Ms Wilson-Raybould and the federal prosecution service not to go ahead with a deferred prosecution agreement for SNC-Lavalin.

Mr Dion’s findings carry no legal implications beyond a possible minimal fine, which his office says are not applicable in this case.

What is the SNC-Lavalin affair?

SNC-Lavalin is one of the world’s largest engineering and construction companies and employs some 9,000 people in Canada.

It is accused of bribing officials in Libya to win contracts under Muammar Gaddafi’s regime and was charged in February 2015 with criminal offences that allegedly took place between 2001 and 2011. 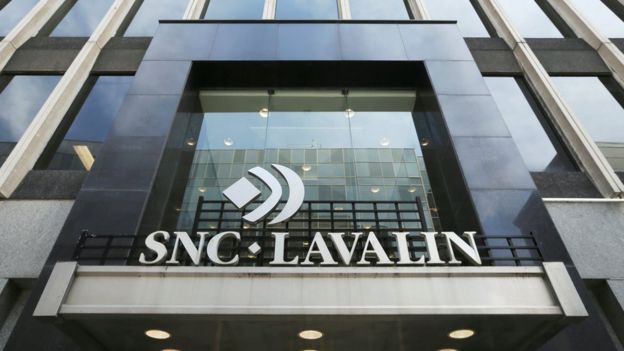 Image caption: SNC-Lavalin has been at the centre of a political crisis for Justin Trudeau

SNC-Lavalin has openly lobbied for an agreement that would allow it to avoid prosecution and instead face alternative penalties or measures, such as a fine.

A conviction could result in a decade-long ban on bidding on Canadian federal contracts and would allow authorities to cancel the company’s current such contracts.

The firm had argued it should be allowed to avoid a trial because it has changed following the federal charges and it has “worked tirelessly to achieve excellence in governance and integrity”.

The company hoped that it could come to an agreement with prosecutors that would be an alternative to trial. The attorney general must consent to the negotiation of the agreement.

Ms Wilson-Raybould said members of Mr Trudeau’s inner circle pressured her to cut a deal, and when she did not, she was removed from her position as justice minister.

She and her colleague Jane Philpott resigned from Mr Trudeau’s cabinet citing their concerns over the affair and were later removed from the Liberal caucus. They are both now running for re-election as independent candidates. 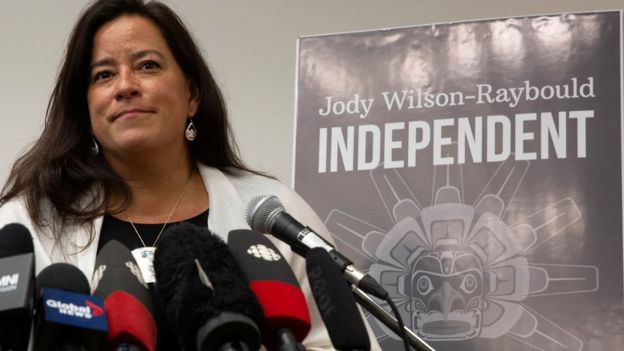 Image caption: Jody Wilson-Raybould is running as an independent after being expelled from the Liberal caucus.

In his report, Mr Dion said that “because SNC-Lavalin overwhelmingly stood to benefit from Ms Wilson-Raybould’s intervention, I have no doubt that the result of Mr Trudeau’s influence would have furthered SNC-Lavalin’s interests”.

What has been the reaction?

Mr Trudeau told journalists that regarding how the SNC-Lavalin affair was handled “we recognise the way this happened shouldn’t have happened” but said his government was acting in national economic interests.

Asked whether he would be firing any of the top aides named in the report, Mr Trudeau said: “The buck stops with the prime minister, and I assume responsibility for everything that happened in my office.”

Ms Wilson-Raybould said the report was a “vindication of the independent role of the Attorney General and of the Director of Public Prosecutions”.

In a statement, she wrote that she was also “saddened” by the report’s conclusions.

“In a country as great as Canada, essential values and principles… should be actively upheld by all, especially those in positions of public trust.”

Federal Conservative leader Andrew Scheer said on Twitter that “Justin Trudeau said he would be accountable and ethical – instead he used the power of his office to reward his supporters and punish his critics”.

Mr Trudeau, his family, and some senior members of the Liberal Party vacationed on the island owned by the philanthropist and spiritual leader in 2016.