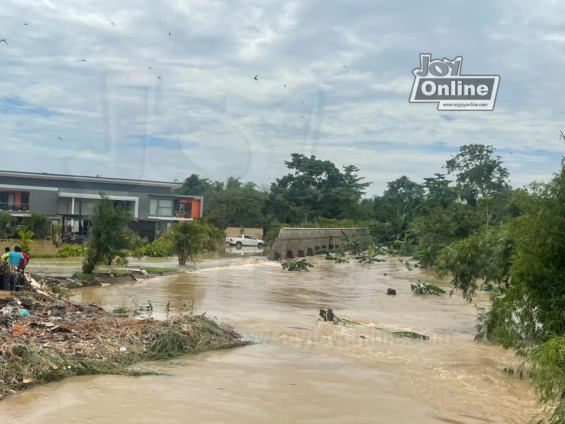 The Ministry of Roads and Highways, acting through the Ghana Highway Authority has announced that a section of the Cape Coast-Twifo Praso Road is currently inaccessible.

In a press release on Saturday, June 18, the Authority said the situation is due to “the recent heavy downpour” which resulted in a Bridge being washed away, leading to a cut off at Jukwa.

The Ghana Highway Authority says it has therefore “taken all necessary steps to ensure that, the Road is reinstated as soon as practicable”.

“Motorists travelling between Cape Coast and Twifo Praso are advised to use the Cape Coast-Yamoransa (N1) – Assin Fosu – Twifo Praso (N8) Road. We apologize sincerely for any inconvenience caused”, the statement concluded.

Part of the bridge linking Cape Coast to Twifo Praso in the Central Region caved in, Saturday afternoon.

Videos and photos which were made available to JoyNews showed that a section of the road had completely caved in rendering the route inaccessible for motorists.

In an interview with JoyNews’ Richard Kwadwo Nyarko, residents said the incident happened because a river known as Surowi had overflowed its banks.

The bridge is known to serve commuters from Cape Coast to Jukwa and also from Dunkwa-On-Offin.

Tourists who were heading to the Kakum National Park were subsequently stranded and had to return to their various destinations.

The water then flooded a building of the Exim Bank CEO which is close to the bridge.

Vehicles which were parked on the compound of the house were reportedly washed away by the flood.

The damage did not only affect residents around the area, but also residents at Ankaful and its surroundings.

The road linking Cape Coast to Ankaful has also been overtaken by the flood, leaving commuters and motorists stranded. No casualties were however recorded.

Following the incident, officials of the National Disaster Management Organization (NADMO) and the Ghana Highways Authority were at the scene to assess the situation to find a temporary solution to the problem.

They said the situation is very worrying and hoped there will not be any downpour which might cause devastation in the area.