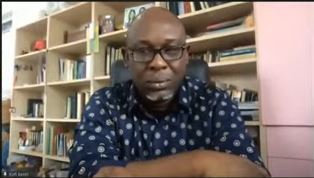 Senior Vice President of IMANI Africa, Kofi Bentil, has commended the Attorney-General’s (AG) Department for the initiatives it adopted to ensure that justice prevails in the defunct Capital Bank case.

According to him, the AG had put everything together to ensure that the State not only recovers funds from the accused but also provide the necessary witnesses for the case.

“I just want to say for whatever it’s worth to the public that this is one of the cases where I think our state officials are doing a good job.

“Over ten witnesses were called, the details we are going through; you can’t just get up and then throw somebody in jail because you believe he has done this or that,” he noted.

Speaking in an interview on JoyNews’ Newsfile on Saturday, he urged the citizenry to trust that the AG will obtain justice.

“Sometimes you have to trust the people who you have elected to do the job. In this matter really, I will say that trust what the AG’s department is doing,” he told host Samson Lardi Anyenini.

He added that, “I doubt if those criticizing the AG would have done better if they were in the same position in this matter.”

On Thursday, December 1, the Commercial Division of the Accra High Court rejected the term of settlements reached between state prosecutors and the founder of Capital Bank, William Ato Essien.

Mr. Essien, per the proposed settlement, agreed to pay GH₵90 million in total: GH₵30 million Thursday and GH₵60 million in an agreed instalment settlement with the state.

The presiding judge, Justice Eric Kyei Baffour, said the state appears to have been compromised.

His judgement sparked many conversations among the populace, who began to question the real intention of the AG for applying Section 35 of the Courts Act.

On the back of this, the Senior Vice President of IMANI Africa explained that the approach adopted by the AG was a step in the right direction.

“Section 35 is a very good provision and those of us who are in policy who look at what goes on in this country and the millions that we lose and we don’t recover over the decade have come to realise that, indeed without section 35 it is lucrative rather to steal. It is without 35 that people steal and I have seen some,” he added.

Mr Bentil explained that, the section provided a provision for the state to recover monies which will end the cycle where people kept running away with state funds.

“There is very good reason, in philosophy and in what is proper and practical for us to have a section 35 and I repeat, because there are people who actually steal state money and want to go to jail for five even ten years; come back and enjoy it,” he added.

“The AG went in fairly within the law to try and gain something for the state. I have seen people who were willing to go to jail come back and come and enjoy their money. So there is good merit to section 35 and I think that I trust the AG’S department”.

DISCLAIMER: The Views, Comments, Opinions, Contributions and Statements made by Readers and Contributors on this platform do not necessarily represent the views or policy of Multimedia Group Limited.
Tags:
Attorney-General's Department
Kofi Bentil