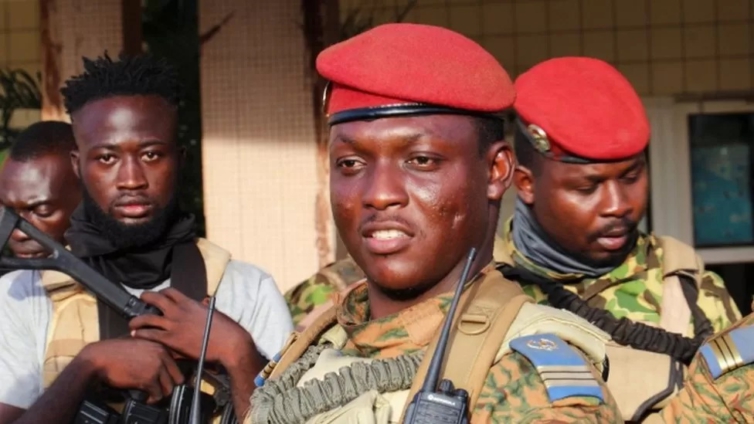 Said to have been a shy but intelligent boy in school, Burkina Faso’s Capt Ibrahim Traoré has become the latest military officer to seize power in a coup in one of France’s former colonies in West Africa.

He overthrew his former comrade, Lt Col Paul-Henri Damiba on 30 September, after accusing him of failing to fulfil his promise of quelling the Islamist insurgency that has gripped Burkina Faso since 2015.

Born in 1988, this makes the 34-year-old captain the youngest head of state in Africa, joining the ranks of two other coup leaders – Guinea’s charismatic Col Mamady Doumbouya, born in 1981, and Mali’s bearded Col Assimi Goïta, born in 1983.

“I know I’m younger than most of you here. We didn’t want what happened but we didn’t have a choice,” Capt Traoré told government officials.

During Lt-Col Damiba’s short time in power, attacks by militant Islamists – some of them linked to the Islamic State group and al-Qaeda – increased in Burkina Faso as they seized territory in rural areas and encircled cities, leaving the state in control of only about 60% of the country, according to some estimates.

With a lack of strong democratic institutions in a country where the military has long been dominant, Capt Traoré seized power with a pledge to improve security in a nation living in fear of the militants.

His coup – the second in Burkina Faso in less than nine months – is the latest sign of the epidemic of coups that UN chief António Guterres raised concern about in 2021.

“My appeal, obviously, is for – especially the big powers – to come together for the unity of the Security Council in order to make sure that there is effective deterrence in relation to this epidemic of coup d’états,” Mr Guterres said at the time.

But with global powers focused either on domestic crises – or the war in Ukraine – they have paid little attention to the instability that has wracked countries such as Burkina Faso.

If anything, Burkina Faso and some other countries have found themselves increasingly embroiled in the cold war rivalry that has been reignited by the Ukraine conflict, as Russia seeks to expands its influence in the region at the expense of France, which has retained close economic, military and cultural ties to many of its former colonies in Africa.

“I know that France cannot interfere directly in our affairs,” Capt Traoré said, adding: “The Americans are our partners now, [but] we can also have Russia as a partner.”

His comments suggest that he could follow the example of his counterpart in Mali, who has allegedly brought in the controversial Russian security group, Wagner, to replace the French in the fight against jihadists, albeit with little success, as the insurgency has worsened there too since the military staged a coup in August 2020.

Capt Traoré cut his teeth fighting the jihadists in Mali. He served in a UN force there, and reportedly “showed bravery” in the face of a “complex attack” by militants in the northern Timbuktu region – famous for its centuries-old buildings – in 2018.

The following year, he participated in a military operation codenamed Otapuanu in Burkina Faso’s restive east for seven months. He also served in a detachment of Markoye in the northern Sahel region and took part in several operations there.

“Traore is close to his men, wilful and courageous. He could not do six months without going to a detachment,” an unnamed source was quoted as saying on Burkina Faso’s Radio Omega.

But Capt Traoré is no decorated war general, only a captain who studied at a local military academy, joined the army in 2009 and received artillery training in Morocco.

He chose a military career after completing his schooling in Burkina Faso’s second city, Bobo-Dioulasso, with reports describing him as “shy and rather reserved” but also “very intelligent”.

Now, Capt Traoré has found himself at the centre of international glare, with some going as far as drawing parallels between him and Burkina Faso’s famous revolutionary, Thomas Sankara – not surprising in a nation looking for political saviours after decades of misrule.

“Ibrahim Traoré has taken over the leadership of the country, like a certain Thomas Sankara, [and] like him after a military coup, captain like him, 34 years old like him. Is this a twist of fate for a Burkina in search of new landmarks?” the privately-owned Wakat Sera website asked.

DISCLAIMER: The Views, Comments, Opinions, Contributions and Statements made by Readers and Contributors on this platform do not necessarily represent the views or policy of Multimedia Group Limited.
Tags:
Burkina Faso
Capt Ibrahim Traoré
Military ruler