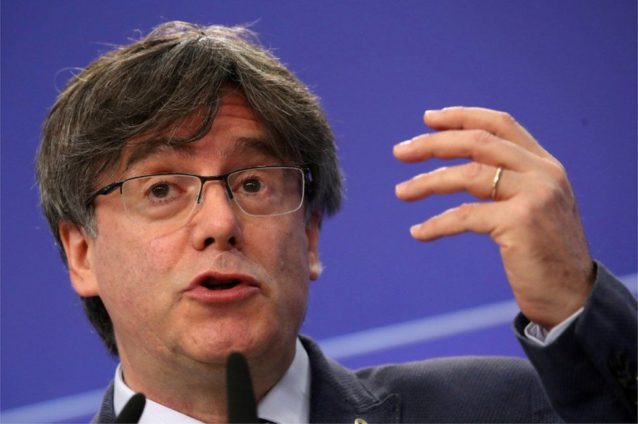 Catalan separatist leader Carles Puigdemont has been detained in Sardinia on a Spanish arrest warrant.

Spain has accused him of sedition, saying he helped organise an illegal independence referendum in 2017.

Mr Puigdemont, the ex-president of the Spanish region of Catalonia, fled Spain after the vote. He now lives in Belgium and sits as an MEP.

He is expected to appear in court on Friday, his lawyer says, and could be extradited.

The 2017 referendum prompted a political crisis in Spain, with the Catalan regional parliament declaring independence from the country, and Madrid imposing direct rule over the region.

Mr Puigdemont initially had immunity from prosecution after being elected as a member of the European Parliament in 2019, but was stripped of that in March.

His office said he was arrested at Alghero airport on Thursday afternoon after being stopped by Italian border police. Mr Puigdemont had travelled to attend a Catalan folklore festival, his lawyer said.

“In the face of persecution and judicial repression, the strongest condemnation. It has to stop,” he tweeted.

The Spanish government said in a statement: “The arrest of Mr Puigdemont corresponds to an ongoing judicial procedure that applies to any EU citizen who has to answer to the courts.”

He should “submit to the action of justice like any other citizen”, it added.

Catalonia is one of Spain’s richest, most distinctive regions and has enjoyed a high degree of autonomy. But many Catalans feel they pay more to Madrid than they get back, and there are historical grievances too, in particular Catalonia’s treatment under the dictatorship of General Franco.