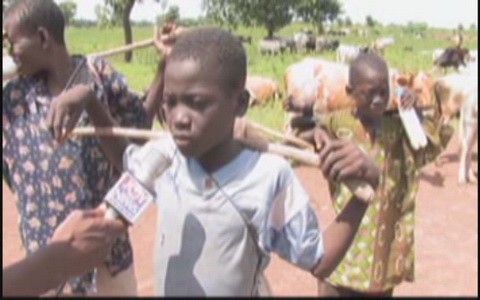 Stay home and take care of the cattle. That is a decision some parents in the Baliga community in the northern regional capital, Tamale are taking to protect their priced animals.

Their decision follows an increase in cattle theft in the area.

As a result, many children in Baliga now seem to have little or no option when it comes to education as their parents are withdrawing them from school to help on the farms, specifically, to take care of their cattle.

According to their parents, the Fulani herdsmen who were originally contracted to do that job are stealing the cattle.

Yakubu Amadu a father of four told Multi TV’s Mohammed Hashmin he has withdrawn all his children from school to take care of his cattle which he believes are at risk of being stolen.

Apart from ensuring that the children guard their future inheritance – the cattle, Yakubu Amadu said “when our animals are stolen and we report to the police, they do not do much to help us retrieve our cattle from the Fulani. So if you want us to stop withdrawing our children from school to take care of our animals then tell government to let the police stop frustrating us”.

The children on the other hand are not enthused by their parents’ decision to have them quit school to tend the cattle.

But cattle theft is just part of the reasons why some parents are forcing their children to leave the classrooms.

The community has just one basic school, the Baliga Presby Primary School. The infrastructure itself is in a bad state compelling school authorities to combine two classes in one room. They children have to sit on opposite sides of the room for their lessons.

Headmaster of the school, Musah Adam says the situation does not augur well for teaching and learning.

“It has been difficult taking the children through lessons in this combined classroom. When there is laughter at one side, the teacher on the other side has to stop teaching till the situation is contained” he said.

He added, “the students report to school very late with the excuse that their parents asked them to help them on the farm. Sometimes, some of the children do not report to school for a whole term. Others come to school without books and school uniforms”.

According to the Headmaster, several appeals to the Tamale Metropolitan Assembly have not yielded any results.

Creating change, a non-governmental organization has agreed to assist the school but they are yet to provide any form of assistance.

The other problem is the absence of a JHS department. This means basic education for pupils in Baliga ends at primary 6. Those who wish to continue their education have to do so elsewhere, preferably Tamale.

But the distance between the two towns means the children need to have at least a bicycle to shuttle between home and school. But again, most parents say they cannot afford a bicycle for their wards.

So, until something is done about the situation, these children, most of whom are of school going age, will continue to play around when they leave home with the excuse of taking care of the cattle.