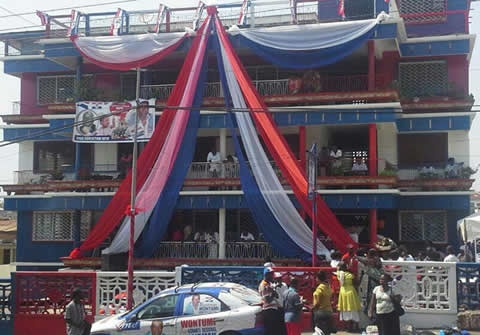 It was merrymaking and excitement when the New Patriotic Party (NPP) unveiled its new Ashanti regional office at Krofrom, a suburb of Kumasi, on Wednesday.

Hundreds of party loy­alists, clad in the NPP para­phernalia, besieged the premises of the three- storey building which was being officially handed over to the NPP leadership.

The building was rent­ed by Bernard Antwi Boasiako aka 'Wontumi', a staunch member of the NPP and a top contender for the Ashanti regional chairmanship position of the party.

Party people in Kumasi and the nearby towns, who were excited about Wontu-mi's largesse decided to grace the handing over of the edifice to make the event memorable.

The enthusiastic NPP members were seen standing on top of buildings and cars just to catch a clearer glimpse of the historic ceremony which was graced by top NPP members.

The three-storey build­ing which was painted in the red, white and blue colours of the NPP, boasts of a car park, conference rooms, offices, rest rooms, among others.

Addressing the gather­ing, Wontumi said he was presenting the office to the party, to help the NPP realise its great ambition of unseating the Mahama-led administration in 2016.

He said he was donat­ing the edifice to the largest opposition political party "not because I am rich", explaining that his gesture clearly buttressed his great love for the NPP.

Wontumi also promised to support the party in diverse ways to help it become strong and ready to defeat the NDC in 2016.

On behalf of the NPP, he thanked all party greats who in the past allowed the NPP to use their houses as regional party office, saying "we are continuing from where they left off."

Frederick Fredua Anto, the Ashanti regional NPP chairman, commended Wontumi for his immense love and passion for the growth of the NPP, urging other party members to emulate his shining exam­ple.

Mr Anto urged the NPP members to embrace peace and unity and shun bicker­ing and backbiting in the party, reminding them that "were one people with a common destiny, and the battle we have is with the NDC and not NPP."

Dr Mathew Opoku Prempeh aka 'Napo' urged all NPP members to unite so that the party could con­quer the NDC in the 2016 general elections which is just three years away.

Sam Pyne, the Ashanti regional secretary of the NPP said Wontumi deserved praise for his usual support for the development of the party,noting that the new office would help enhance the party's work.