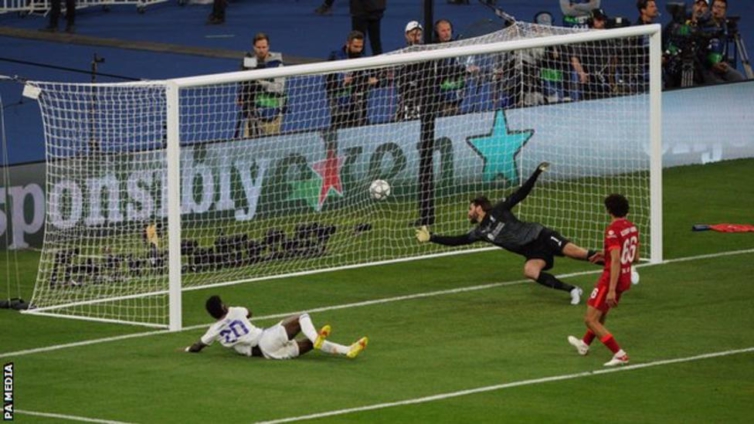 Real Madrid are champions of Europe for a record 14th time

Liverpool’s hopes of being crowned champions of Europe for a seventh time ended in heartbreak at the hands of Real Madrid in Paris.

Liverpool had several attempts on target but were frustrated by a brilliant goalkeeping display by Thibaut Courtois, the former Chelsea man tipping Sadio Mane’s attempt on to the post before keeping out Mohamed Salah late on with a superb one-handed save.

The final started 36 minutes after the scheduled 20:00 BST kick-off due to “security reasons” after pictures emerged in the build-up of huge crowds of fans queuing to get into the Stade de France.

Liverpool’s magnificent season brought them the Carabao Cup and the FA Cup – both won on penalties against Chelsea – but ended in a double disappointment in the final week of a stellar campaign.

The Champions League might have eased the agony of just missing out on the Premier League to Manchester City by one point, only for Liverpool to find themselves on the wrong end of a goalkeeping masterclass from Courtois.

The Belgian was simply perfect as he was a constant thorn in Salah’s side, turned Sadio Mane’s shot on to the post brilliantly and commanded his penalty area with faultless handling.

Salah held his head in disbelief on many occasions as Courtois manned the barricade for Real, leaving the Egyptian to nurse the pain of another Champions League final defeat by the Spanish giants.

Liverpool were not quite at their best and eventually paid the price for not taking chances as Real pounced in trademark fashion to win this tournament for a record-extending 14th time.

Klopp’s side could not have given any more as they pushed to the final whistle but looked jaded towards the end – no surprise given their demands this season.

Liverpool will still take huge credit for maintaining a push for a historic quadruple until the final week of the season but the conclusion will sting.

The occasion left even more of a sour taste given the events outside Stade de France. Liverpool are demanding a full investigation into how thousands of their fans could not get into the stadium, with dangerous numbers packed into small areas as kick-off approached.