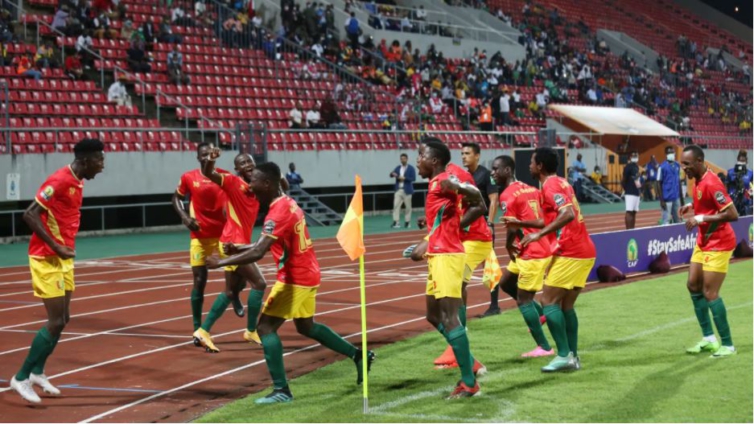 Guinea opened their TOTAL African Nations Championship campaign in style when they hammered Namibia 3-0 at the tournament in Cameroon on Tuesday.

Horoya AC striker Yakhouba Barry was the hero after scoring two goals for the Syli National in their opening match of the tournament exclusively home-based players.

Barry profited from a faulty back pass from defender Immanuel Heita to goalkeeper Edward Maova in the 13th minute to put the West Africans in the lead.

Horoya AC star Sylla curled beautifully from the edge of the box to extend their advantage just before the break and a late strike from Barry sealed the emphatic victory.

With several players from continental giants Horoya in their squad, Guinea were the favourites and they demonstrated their strength early in the game.

The Sylli National pressed from the start of the game and when Barry spotted a sluggish pass from Heita, the striker raced to get the ball before it could reach the Namibian goalkeeper.

The attacker appreciatively intercepted the pass and easily slotted home to send the vociferous Guinea fans in the stands into raptures.

Desperate to restore parity, Namibia threw more men forward but there were louder cheers for the West Africans when a swift counter-attack allowed Sylla to break centre of the pitch.

The Horoya midfielder used his pace and dexterity to outwit two approaching Namibian defenders before curling stunningly beyond goalkeeper Maova.

The Brave Warriors returned from the break determined to make amends from their uninspiring first-half display by putting Guinea defenders under pressure.

Playmaker Ambrosius Amseb hit a free-kick from 30 yards into the top corner but it was tipped over by the agile goalkeeper Camara.

Barry sealed the fate of Namibia in the 86th minute when his feebly struck the ball was touched by Maova but the latter’s effort was not enough to prevent the ball from entering the net.

Guinea will face a tough Zambian side in their next group match on Saturday while Tanzania take on Namibia in the day’s other game.

I am very delighted with the 3-0 win in our first match.We must treat every game with a lot of seriousness because every team that is here is strong. Although we beat Namibia, we did not underrate them from the start, but only selected a team that reacted well to win the game.

We take lessons from this defeat to Guinea. We conceded two goals because of some silly mistakes. There are no excuses here, but we lost to well-prepared team of Guinea. We now need to go back to the drawing board to plan for our next game against Tanzania.