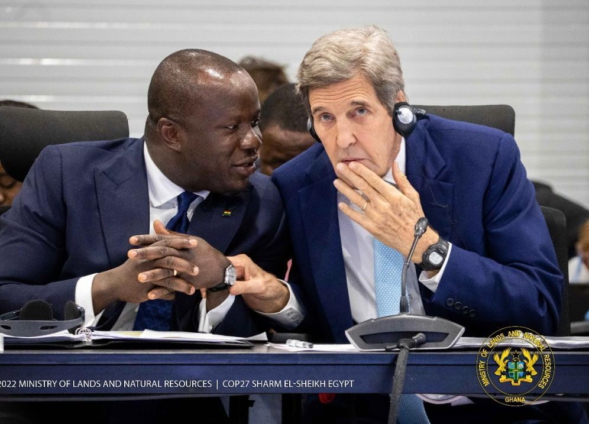 Speaking on the sidelines of the COP27 in Sharm El-Sheikh, Egypt, he noted that without the express commitment of global leaders, particularly the Western World to creating a financial and trading architecture that supports the drive for sustainability, developing nations would be unable to meet the demands of the climate action.

Referencing calls for cocoa growing countries to ensure that their cocoa sectors are sustainable, the Minister admitted that while the cocoa sector is a contributor to climate change through deforestation, without adequate support for cocoa farmers all climate actions in the sector will come to naught.

“…Which is true in many respects that cocoa expansion has the tendency or the potential of driving deforestation, but in so saying, you also have to pay attention to the cocoa farmer.

“Because the cocoa farmer has been used [to] and has been involved in this industry and enterprise for centuries in a particular manner by expanding their farms through planting their cocoa, by harvesting it in a particular way, suddenly because of climate change which is far away from him, which he barely has contributed to or which he’s not contributed anything to its occurrence, you’re telling the cocoa farmer to change his ways of cocoa industry.

“And therefore if you are going to ensure that you have a sustainable cocoa industry, the cocoa farmer’s interest, his welfare, the cocoa farmer’s pricing, the pricing of cocoa, the issue of premium, all of those things must be factored into it. So we have to continue to push,” he said.

“We cannot ask cocoa farmers, and we cannot ask developing countries like Ghana whose economies depend on industries, commodity industries like cocoa to change our methods of agriculture, or cocoa production when we’re contributing 0.04%, when we’re not historically responsible for the situation we find ourselves in.

“So the West has a moral responsibility and a duty, and as a matter of fact, it is in their own national and collective interest for us to change the global trading architecture. And cocoa, the commodity cocoa should be one of the areas we should look at and I made that point yesterday.

DISCLAIMER: The Views, Comments, Opinions, Contributions and Statements made by Readers and Contributors on this platform do not necessarily represent the views or policy of Multimedia Group Limited.
Tags:
COP27
Samuel Abu Jinapor