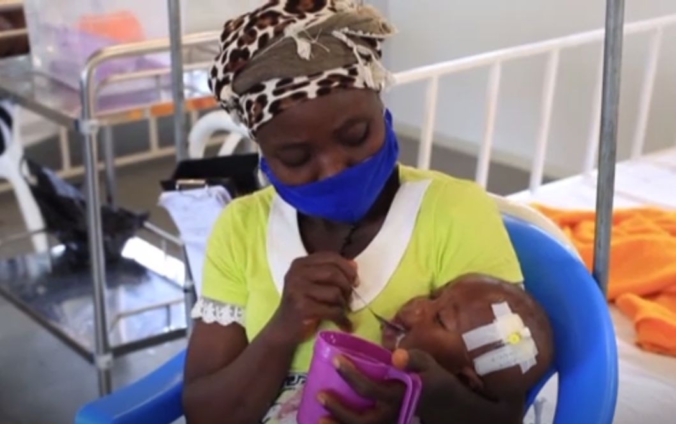 Doctors in a rural Sierra Leone hospital may be accustomed to treating severely ill infants, but they recently admitted one of the worst cases they had ever seen.

An 18-month-old with pallid skin and thinning hair arrived on the wards in the eastern town of Hangha in July suffering from an alarming combination of pneumonia, diarrhoea and malaria.

The girl recovered, but doctors are warning that extreme cases such as hers are growing more common as patients avoid hospitals for fear of contracting COVID-19.

Medical charity Doctors Without Borders (MSF), which runs the free hospital in Hangha, near the city of Kenema, says it has received 40 percent fewer patients since late March.

The dangers of avoiding healthcare are especially acute for children during the ongoing rainy season — when malaria cases spike.

“We are facing a malaria pandemic, with severe malnutrition of most of the children that arrive at the hospital,” said Laure Joachim, a paediatrician at the 63-bed facility.

The number of children affected nationwide is unclear, but it is likely high. Health ministry records seen by AFP show that malaria cases usually account for about a quarter of hospital referrals in the West African state. The disease also kills thousands every year.

This year, NGOs and the government have to surmount a creaking health system and pervasive coronavirus misinformation to provide treatment.

Sierra Leone, though rich in diamonds, is still recovering nearly two decades after the end of a civil war which claimed some 120,000 lives. From the 2014-16 West Africa Ebola outbreak, 4,000 people in the country died.

Health officials in Sierra Leone have recorded 1,937 coronavirus cases to date, with 69 fatalities — relatively low numbers compared with hard-hit countries such as Brazil and the United States.

Many parents of ill children resort to risky traditional healers rather than going to hospital.

“We have many cases of children that are severely ill with multiple organ failures because some traditional herbs are toxic,” Joachim, the hospital paediatrician explained.

Misinformation and fear are thought to deter parents.

Sahr Abdulai Surkiti, a community health worker in the Kenema region, said that the harrowing memory of Ebola explains some of the fear.

“When the ambulance came for the sick they never returned,” Surkiti said of Ebola patients.

MSF says Kenema was the Sierra Leonean region worst affected by Ebola, with more than 200 health workers dying while fighting the disease.

But misinformation is playing a role too. Surkiti is one of a number of poorly paid officials who travel to rural villages to explain how COVID-19 is treated, and to encourage the visibly ill to go to hospital.

According to Sarah Vandi, a nurse in the small Kenema town of Talia, ” people are scared to visit the health centre when they are sick,”

“We do not have running water or even a motorbike for outreach activities,” she added.

Sierra Leone already had a dire record on children’s health before coronavirus struck.

According to the United Nations one in five children dies before reaching age five.

Malnutrition, which leaves children more vulnerable to disease and infection, is a leading cause of death.

MSF is donating drugs and vaccines to cash-strapped local health centres, and operates mobile clinics in remote areas. It also plans to expand its hospital in Hangha.

“Sixty to 80 percent of the patients we treat are malaria positive,” says MSF doctor Mamadu Laine during a visit to the village of Manokortuhun.

He added that the health system is strained and needs more investment to fight malaria.

“It continues to cause suffering and dismantle families,” he stressed.

In Manokortuhun, a pregnant woman named Watta Musa said she had already lost babies because of health complications.