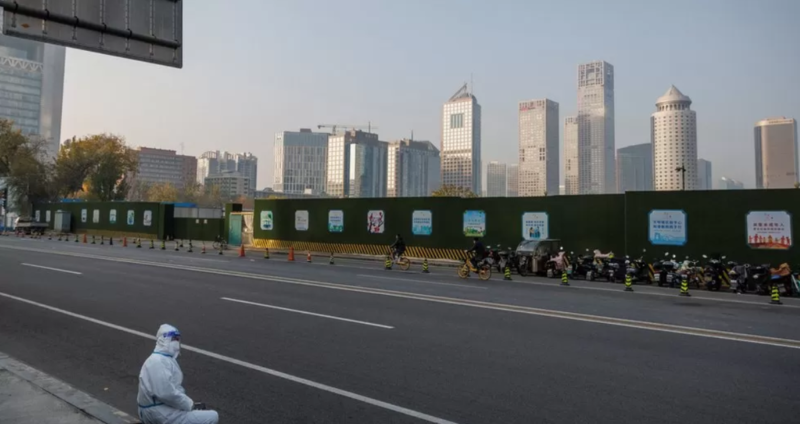 China has recorded its highest number of daily Covid cases since the pandemic began, despite stringent measures designed to eliminate the virus.

The numbers are still tiny for a country of 1.4 billion people and officially just over 5,200 have died since the pandemic began.

While China’s zero-Covid policy has clearly saved lives, it has also dealt a punishing blow to the economy and ordinary people’s lives.

The country slightly relaxed some of those restrictions a few weeks ago.

It cut quarantine for close contacts from seven days in a state facility to five days and three days at home, and stopped recording secondary contacts which allowed many more people to avoid having to quarantine.

Officials have also sought to avoid enforcing blanket lockdowns of the kind endured by the largest city, Shanghai, earlier this year.

But faced with a renewed surge in cases in Beijing, as well as the first deaths from the virus in months, officials have already implemented some restrictions in several districts, with shops, schools and restaurants closed.

The central city of Zhengzhou is also to enforce an effective lockdown for 6 million residents from Friday, officials announced.

It follows violent protests at a vast industrial complex belonging to iPhone manufacturer Foxconn. The firm has apologised for a “technical error” in its payment systems.

Other stories of suffering and desperation have been shared online where they have fuelled public resentment.

Last week, reports that a baby in Zhengzhou died because her medical care was delayed by Covid restrictions prompted a huge outcry.

Among some of the most severe responses to Covid this year:

Worn out by the pandemic

The word came suddenly last night that our housing compound would be locked down with all residents confined to their homes.

This is not a surprise in China anymore. At any point, a single infection or being linked to an infection can mean not being allowed out.

Beijing is in the middle of a major Covid outbreak but, even before then, visiting a shopping mall or a building where an infected person had been meant going into home quarantine.

Right now, in the capital’s vast Chaoyang district most businesses are closed. In thousands of tower blocks, all residents have been ordered to remain indoors for the next few days initially.

Then consider that this is being replicated in cities right across the country.

In the regions of Xinjiang and Tibet, the lockdowns have gone on for months.

At the beginning of 2023, this country will be heading into its fourth year of this crisis and, whether it is true or not, zero-Covid has a never-ending feeling to it.

People are completely worn out by the pandemic and the government’s economy-destroying response to it.

That officials have not explained where the off ramp is, has only added to the uncertainty.

Scientists here can also see that China’s vaccination rates are way too low, especially amongst vulnerable groups. What is more, not enough resources have been diverted into expanding medical facilities to cope with a massive influx of patients following any opening-up.

In the short term though, my compound has now told me that, after several rounds of mass testing, we are allowed to leave.

For most residents this will not make much difference though because hardly anything outside is open, including their workplaces.

China is the last major economy still pursuing a Covid eradication process with mass testing and lockdown rules, and virus cases are being recorded in 31 provinces.

Part of the reason is that vaccination levels are lower than in other developed nations, and only half of people aged over 80 have their primary vaccinations.

China has refused to import vaccines despite evidence that its homemade jabs have not proved as effective.

Zero-Covid has come to define his rule and the authoritarian bureaucracy at his disposal like almost no other policy.

It projects a veneer of control and stability in the run-up to March when China’s equivalent of a parliament will convene to choose Mr Xi as president for a third time.

DISCLAIMER: The Views, Comments, Opinions, Contributions and Statements made by Readers and Contributors on this platform do not necessarily represent the views or policy of Multimedia Group Limited.
Tags:
China
Covid-19
Surge