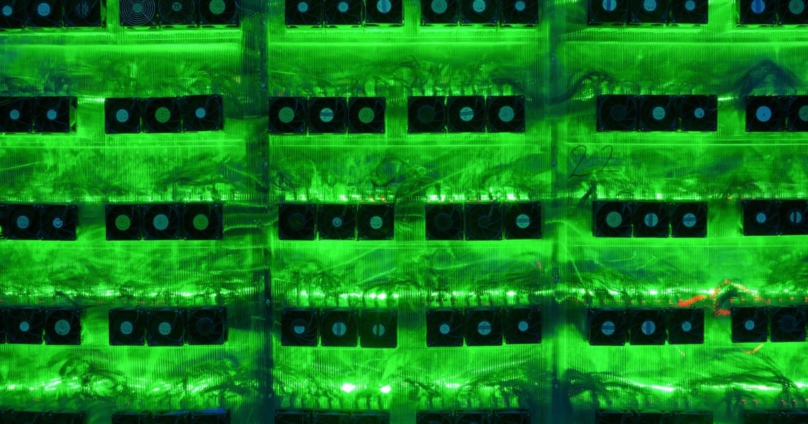 Illuminated mining rigs operate inside racks at the CryptoUniverse cryptocurrency mining farm in Nadvoitsy, Russia, on Thursday, March 18, 2021. The rise of Bitcoin and other cryptocurrencies has prompted the greatest push yet among central banks to develop their own digital currencies. Photographer: Andrey Rudakov/Bloomberg

Cryptocurrency mining operators, including Huobi Mall and BTC.TOP, are suspending their China operations after Beijing stepped up its efforts to crack down on Bitcoin mining and trading, sending the digital currency tumbling.

A State Council committee led by Vice Premier Liu He announced the efforts late on Friday – the first time the council has targeted virtual currency mining, a big business in China that accounts for as much as 70 percent of the world’s crypto supply.

Crypto miners use increasingly powerful, specially-designed computer equipment, or rigs, to verify virtual coin transactions in a process that produces newly minted cryptocurrencies such as Bitcoin.

Bitcoin took a hammering after the latest Chinese move and is now down nearly 50 percent from its all-time high. It shed as much as 17 percent on Sunday, before paring some losses and was last trading steady in Asia.

Investor protection and prevention of money laundering are particular concerns of governments and financial regulators who are grappling with whether and how they should regulate the cryptocurrency industry.

US Federal Reserve Chairman Jerome Powell turned up the heat on cryptocurrencies last week, saying on Thursday that they pose risks to financial stability and indicating that greater regulation may be warranted.

A shift to overseas

Huobi Mall, part of cryptocurrency exchange Huobi, said in a statement late on Sunday that all its custody businesses have been suspended.

“Meanwhile, we’re contacting overseas service providers, to pave way for exports of mining rigs in the future,” Huobi Mall said via its official Telegram community, and asked clients “not to worry and calm down”.

Founder Jiang Zhuoer said in a microblog post via Weibo that in the future, BTC.TOP will mainly conduct crypto mining business in North America.

“In the long term, nearly all of Chinese crypto mining rigs will be sold overseas, as Chinese regulators crack down on mining at home,” he wrote.

China has already lost its position as a global cryptocurrency trading centre after Beijing banned crypto exchanges in 2017.

“Eventually, China will lose crypto computing power to foreign markets as well,” Jiang said, predicting the rise of US and European mining pools.

HashCow, another crypto miner that owns 10 mining sites in Chinese provinces including Xinjiang and Sichuan and sells computing power to investors, said it will fully comply with government regulations.

In a statement to clients, HashCow said it will suspend buying new Bitcoin rigs, and promised a full refund to those investors who had placed orders for computing powers but had not yet started mining.

Aside from the sheer scale of the slump in virtual currencies last week – the Bloomberg Galaxy Crypto Index fell almost 40 percent, the most since the pandemic turmoil in March last year – significant intraday price swings have also captivated investor attention.

Still, RBC derivatives strategist Amy Wu Silverman argued in a note Sunday that, based on a measure of risk-adjusted returns known as the Sharpe ratio, Bitcoin has done better than shares in Tesla Inc., the SPDR S&P 500 ETF Trust or Invesco QQQ Trust Series 1.

Bitcoin, Ether and meme virtual currencies like Dogecoin are still sitting on major gains over longer time-frames, such as the past year – about 12,000 percent in the case of Dogecoin.

For Ben Emons, managing director of global macro strategy at Medley Global Advisors in New York, Bitcoin is “firming its grip on markets through volatility, liquidity and correlation”.

DISCLAIMER: The Views, Comments, Opinions, Contributions and Statements made by Readers and Contributors on this platform do not necessarily represent the views or policy of Multimedia Group Limited.
Tags:
China
Crypto Currency
Mining operators