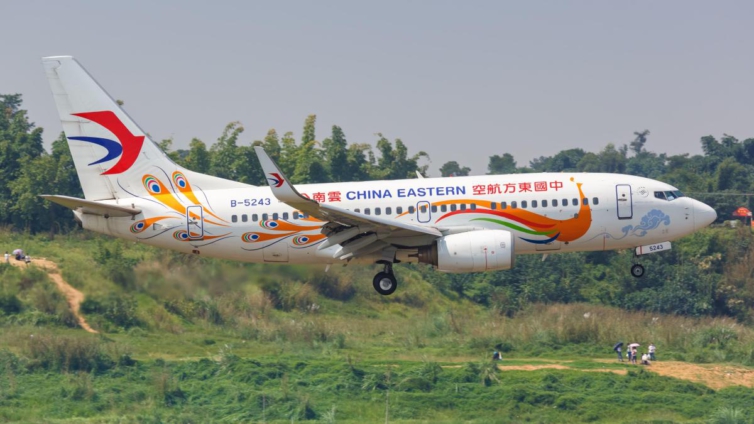 A Chinese passenger plane with 132 people on board has crashed in a forested hillside in southern China.

The China Eastern Airlines Boeing 737-800 was flying from Kunming to Guangzhou when it plunged to earth in Guangxi province and caught fire.

The number of casualties and reason for the crash are not yet known. Rescuers have seen no signs of survivors.

The crash has caused shock in China, where President Xi Jinping has ordered an immediate investigation to determine the cause. China Eastern Airlines has grounded all its 737-800s.

Flight tracking data suggested the plane lost height rapidly from its cruising altitude before plummeting to the ground.

More than 600 emergency responders are said to be at the crash site. Firefighters reached the scene first and managed to extinguish a blaze in the hills caused by the crash.

Footage taken by local villagers and shared on Chinese social media – and by state broadcasters – showed fire and smoke from the crash, with plane debris on the ground.

Air safety and aviation standards in China have improved vastly in recent decades, following a series of accidents in the 1990s, and crashes such as this are now very rare.

The country’s last major plane accident was in August 2010, when a flight from Harbin crashed in north-east Yichun during foggy weather, killing 42 people.

China Eastern has set up a hotline for people seeking information about those on board. It expressed “its deep condolences for the passengers and crew members who died”.

As a precaution, China Eastern’s entire fleet of Boeing 737-800 jets has been grounded.

It took just two and a half minutes for an apparently normal flight to turn into a tragedy.

The aircraft was a 737-800, a well-proven design first produced in the late 1990s. It is a workhorse of the aviation world, with thousands still in service.

It has a strong safety record. Fatigue cracks have been found in some older planes, but this one was not quite seven years old.

There is no connection here with the 737 MAX, a newer version of the 737, which was grounded for more than a year and a half after a design flaw triggered two major accidents.

Investigators will be looking at many possible causes – among them deliberate action, such as terrorism, technical issues such as structural failure, or a mid-air collision.

They will look at communications from the pilots, examine the state of the wreckage – and search for the flight data recorder and cockpit voice recorder.

Those recorders should contain the information needed to confirm exactly what happened during those minutes and why.

Staff at Guangzhou airport are directing worried relatives to a separate zone set up to receive them.

One woman waiting for news there told local media she had booked a seat on the flight, but ended up switching to an earlier plane.

“I feel very sad,” she said. Her sister and four friends were on the crashed plane, AFP news agency reports.

State-owned China Eastern is one of China’s big three airlines, along with China Southern and Air China.

Flight tracking sites report the plane was in the air for just over an hour and was nearing its destination when it went down in Wuzhou, a verdant, hilly area prone to mixed weather at this time of year as China enters its annual flood season.

The weather was cloudy, but visibility was reported to have been good at the time of the crash.

Footage said to be of Flight MU5735 plummeting vertically from the sky has been circulating on social media.

According to FlightRadar24 data, the plane was cruising at 29,100ft, but two minutes and 15 seconds later it was recorded at 9,075ft. The last sourced information on the flight showed it ended at 14:22 local time, at an altitude of 3,225ft.

“Usually the plane is on autopilot during cruise stage. So it is very hard to fathom what happened,” Li Xiaojin, a Chinese aviation expert, told Reuters news agency.

Another expert, Wang Ya’nan, chief editor of Beijing-based Aerospace Knowledge, told China’s Global Times newspaper: “It is very likely that the aircraft lost power at cruising altitude, resulting in the pilot losing control of the aircraft.

“This is a very serious technical failure in which the plane inevitably enters a high-speed descent.”

The Boeing 737-800 plane was nearly seven years old, according to tracker websites. It is the predecessor model to the Boeing 737 Max line, which were the planes involved in deadly crashes in Indonesia in 2018 and Ethiopia in 2019.

China banned that model after those crashes.

Boeing issued a statement on the crash of MU5735, saying: “We are aware of the initial media reports and are working to gather more information.”

China’s Civil Aviation Administration said it had dispatched its investigators to the scene.