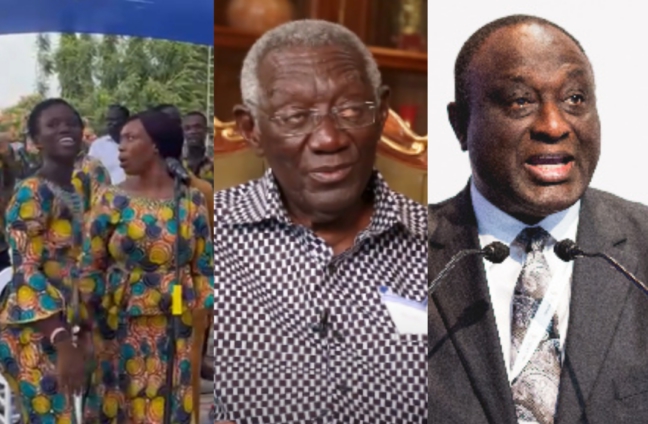 Ghana’s former President, John AgyeKum Kufuor was the toast of many Ghanaians following his 84th birthday anniversary on Thursday.

The day was marked by hundreds of well wishers on both traditional and social media.

They hailed his era as Ghana’s Head of State and expressed gratitude to God for his life and health.

However, on the sidelines of the celebrations, a video of a choir singing an endorsement tune for Trade Minister, Alan Kyerematen, at Kufuor’s birthday party is currently making the rounds on social media.

In the said video, Alan, who was amongst the many prominent guests to grace the occasion, was spotted delightfully responding to the tunes from the choir, as he walked to appreciate them.

Approaching the choir, the NPP flagbearer aspirant was flanked by other party members who all danced to the song from the choir.

The first time this song came into the public domain was when Mr Kyerematen was contesting the NPP’S flagbearership slot in 2007, against other prominent party stalwarts like the current president, Nana Akufo-Addo.

It was a song that resonated with his supporters, who used it to communicate their affections and preference for his candidature.

It’s latest rendition however, was at former president’s Kufuor birthday party, organised at his residence.

Here’s a video of the choir, rehashing Alan’s endorsement tune at the event.

Meanhwhile, the race for the flagbearer of the New Patriotic Party continues with party members lending their support to aspiring runners.

A contest is scheduled to be organised next year to determine who leads the party in the next presidential polls.

DISCLAIMER: The Views, Comments, Opinions, Contributions and Statements made by Readers and Contributors on this platform do not necessarily represent the views or policy of Multimedia Group Limited.
Tags:
Alan Kyeremanten
John Agyekum Kufuor
Kufuor's birthday
New Patriotic Party (NPP)