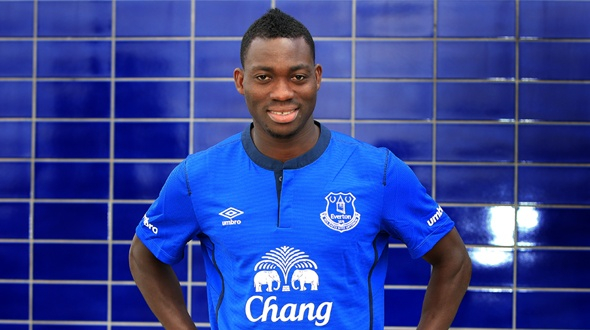 Everton have completed the signing of winger Christian Atsu on a season-long loan from Chelsea.

The Ghana international, 22, passed a medical on Wednesday and, having secured a work permit, will now be available for Saturday's Barclays Premier League opener at Leicester City.

"I'm very happy to be joining Everton because it's a great club, which likes to play football, and it's a great pleasure to be here," Atsu told evertontv. "Playing in the Premier League has always been a dream for me and I have achieved that dream.

"This is the biggest level for me to play at. I know that it's a very competitive league and I believe with hard work we're going to be successful this season."

Roberto Martinez had previously expressed his desire to add a wide man to his squad and the Toffees chief said: "He's a player who fits in with the culture and the way we want to play. He's a very gifted, technical footballer and he's got the right personality and character to fit in with the group, which is vital.

"He will excite fans because he brings something completely different and a different way of playing to what we've got in the squad.

"He's a left-footed player who loves taking people on and he's got a really good understanding of the game for such a young man.

"He also brings extra competition in a position in which we felt we needed a player full of desire and hunger, who really wants to make things happen in the final third of the pitch."

Signed by Chelsea from FC Porto last September, Atsu spent the 2013/14 season on loan in Holland with Vitesse Arnhem, scoring five goals in 28 league appearances, before starting all three of Ghana's games at this summer's World Cup in Brazil.

Martinez added: "For Christian, at 22, to already have played in a World Cup, to have been able to adapt into Portuguese football and into the league in Holland is a really good accumulation of experiences that will be very beneficial, especially with us playing in the Europa League this season."