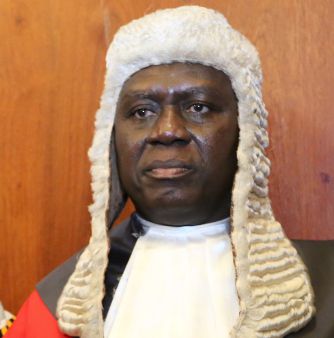 Chief Justice Kwasi Anin-Yeboah has admonished the legal counsels in the ongoing election petition hearing to desist from any media engagements after court proceedings.

He made a passionate plea Monday, after the cross-examination process of Robert Joseph Mettle-Nunoo, the third witness for the petitioner, John Mahama.

Justice Anin-Yeboah cautioned the spokespersons for the petitioner, Marietta Brew Appiah-Oppong and a member of 2nd respondent’s legal team, Yaw Oppong to refrain from such unethical conducts.

“Both sides have been guilty of it. My dear sister Marietta, sometimes you make statements touching on the demeanour of the witnesses. It is a passionate plea from the bench.

“Let us respect the etiquette. Mr Oppong you are also guilty of it. Since it has been announced in this case, it is unacceptable,” he stated.

According to him, events and facts that happen in the court end up being twisted in the eyes of the general public during such engagements.

In addition, he said this conduct is prejudicial and breaches Regulation 55 that dictates the professional etiquette and ethical conduct of members of the Bar.

Regulation 55 states: “A lawyer shall not publish or cause to publish a material cornering current or potential proceedings including proceedings for which the lawyer is engaged or seeks to be engaged which is inaccurate or has received comments on unnecessary description.

“It is calculated or is likely to a material degree to diminish or be prejudicial to the public confidence in the administration of justice.”

However, both Marietta Brew Appiah-Oppong and Kojo Oppong Nkrumah interacted with the press after proceedings.

Marietta Brew Appiah-Oppong who spoke on behalf of the petitioner said the 1st respondent, EC Chair is evading from cross-examination by Tsatsu Tsikata.

She indicated that it is imperative to have Mrs Mensa in the witness box.

“If you have sheets with numbers in words’ column and words in figures’ column and these are different, which one was used for the declaration or collating. The only person who can tell us this is the EC Chair who is the returning officer,” she added.

However, Oppong Nkrumah is insistent that the petitioner has presented no substantive case to the Supreme Court that requires the EC Chair into the witness box.

“Our lawyers are of the view that the basic threshold has not been met. They have not adduced any evidence that shows nobody won the elections. That is why nobody will be bothering to take the stands,” he stated.

DISCLAIMER: The Views, Comments, Opinions, Contributions and Statements made by Readers and Contributors on this platform do not necessarily represent the views or policy of Multimedia Group Limited.
Tags:
2020 election petition
Chief Justice Kwasi Anin-Yeboah