CJ vs Ayine: I smell inconsistency, lack of courage and fear in Dr Ayine – Kweku Baako 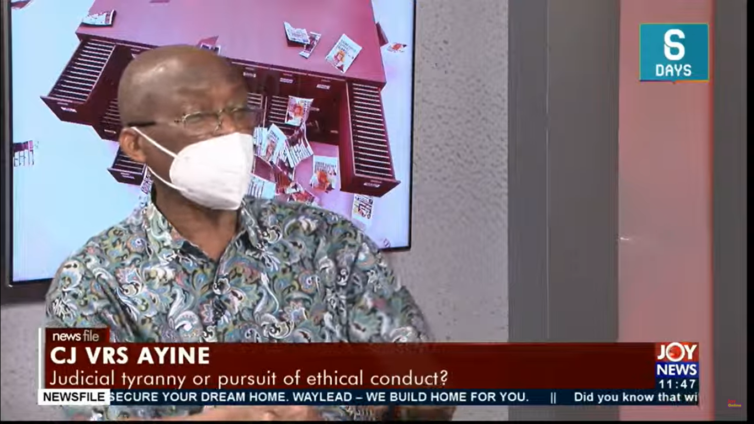 The Editor-In-Chief of the New Crusading Guide has observed some inconsistency in Dr Dominic Ayine’s position concerning the Supreme Court’s decision on the 2020 Election Petition.

According to Kweku Baako Jnr, Dr Ayine’s apology before the Supreme Court when he was charged for contempt and subsequent repetition of the same comments at another forum smacked cowardice and lack of courage of conviction.

“What was the basis of the apology that he rendered to the Supreme Court? Was it out of fear? Was it based on lack of courage of conviction? Did he think he was genuinely wrong and so offered an apology?” He quizzed.

Mr Baako, who was participating in discussions on JoyNews’ Newsfile Saturday, June 5, doubted the authenticity of the apology rendered by the NDC legislator to the Supreme Court.

Dr Ayine had apologised to the Supreme Court upon being charged for contempt during the 2020 Election Petition hearing.

However, contributing to discussions at a judicial review dialogue series organised by the Ghana Centre for Democratic Development (CDD-Ghana) last month, he repeated the same comments which sought to question the independence of the judiciary.

During the forum, the former Deputy Attorney General said that the Supreme Court did not demonstrate its independence due to the manner it arbitrated the 2020 Election Petition hearing.

“The posture of the Supreme Court throughout the Election Petition hearing suggests that it had a “pre-determined agenda” to rule against the petitioner, John Dramani Mahama, ” Dr Ayine maintained.

Subsequently, the Chief Justice, Kwasi Anin-Yeboah, petitioned the General Legal Council for Dr Ayine to be investigated for repeating those remarks which, he believes, impugn the integrity of the Supreme Court.

But the veteran journalist says the CJ went overboard as the issue could have been dealt with differently without arousing public criticisms.

“Maintaining his position about the Apex Court’s judgment on the 2020 election petition, after the initial apology, raises doubts about his personality.

“He is no longer at the Supreme Court; that is not where we are judging him; we are seated here and analysing him. I smell inconsistency, lack of courage of conviction, some fear. That is not what you sell to people to emulate. If you do not believe in something, stick to it.

“The courage of conviction that must accompany your track record is very important. You do not sacrifice it because perhaps this time around, you can say it and get away with it. It means perhaps at the Supreme Court you didn’t mean your apology, but you knew that the implication will be dire, so you have to give in and apologise,” he stated.

Nonetheless, Mr Baako has called on Chief Justice to accommodate Dr Anyine’s comments for which he is being investigated.

Describing it as an “overkill”, the Editor-In-Chief said the outspoken legislator was at an “appropriate forum” when making the comment; thus, his comments must be considered as constructive criticism instead of an attack against the Judiciary.

“But perhaps the CJ’s thing is overkill in my candid opinion. Here was a situation where it was a give and take. Judicial decisions being subjected to criticisms is normal and constructive so generally speaking, I think we should be able to accommodate that situation and allow it to pass,” he told host Samson Lardy Anyenini.

DISCLAIMER: The Views, Comments, Opinions, Contributions and Statements made by Readers and Contributors on this platform do not necessarily represent the views or policy of Multimedia Group Limited.
Tags:
Chief Justice Anin-Yeboah
Dr Dominic Ayine
Election Petition 2020
Kweku Baako