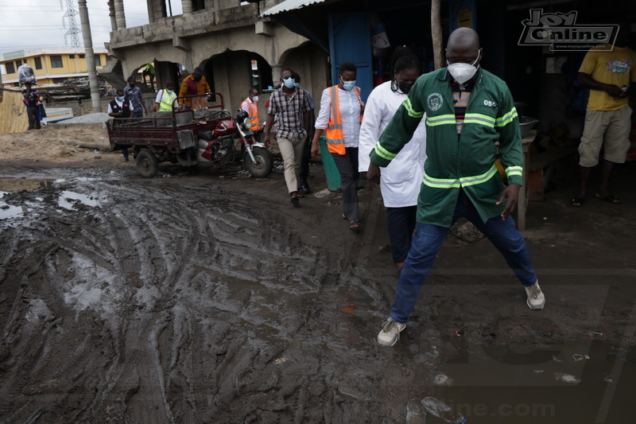 Over 350 meat sellers at the London market in Accra do not have medical certificates; the public health inspectors of the AMA they stormed the market at Jamestown on Wednesday.

The visit by the team as part of the Joy Clean Ghana Campaign revealed flagrant disregard for Covid-19 protocols as close to none of them wore a face mask.

The meat was dressed in a dilapidated structure overtaken by cobwebs.

The dilapidated structure in which they dressed the meat had been overtaken by cobwebs also.

Head of the AMA’s Environmental Unit, Joseph Asitanga asked “where are your medical certificates? You need that to show that you are indeed medically cleared to sell meat to the public”.

In response, chairman of the meat sellers at the Market, Sure Danlai said apart from the challenges with some AMA officials, some of the sellers at the market deliberately refused to take the medical test”,

“There are about 350 sellers here. I have told them that if they do not take the test, I’ll cause them to be put before court”, he said.

It gets worse. The stench at the market was almost the same as that at the Avenor slaughterhouse. The meat being processed are left at the mercy of flies in the already dilapidated structure, overtaken by cobwebs.

Before we could leave, someone else caught our attention. A waakye seller just at the exit of the market was dishing the food for sale. A bit of it fell to the ground and she picked it in an attempt to add it back to the wholesome pile. It took the intervention of the team to stop her.

“I am not going to add it”, she retorted as she was confronted by the AMA officials.

Abatement notices were issued to all the offending traders.