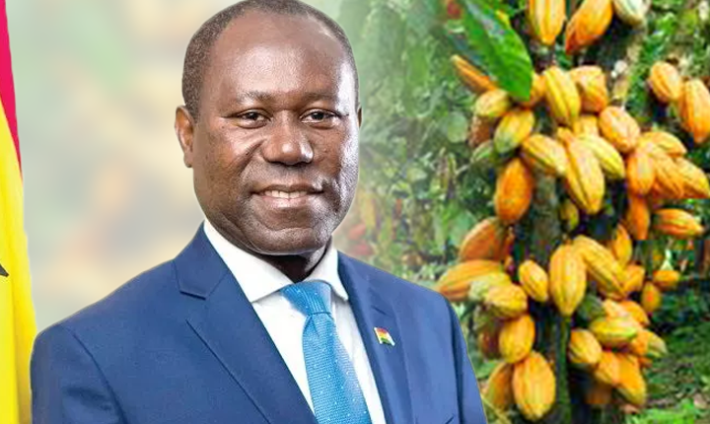 Joseph Boahene Aidoo is the CEO of Cocobod

The Ghana COCOBOD and their European Cocoa Buyers have reached an economic agreement to ensure cocoa buyers pay an additional $400 per tonne for cocoa beans.

The agreement follows a crunch meeting between officials of Ghana’s cocoa regulator and major European cocoa buyers over concerns on cocoa price irregularities.

Confirming this agreement to Joy Business, Head of Public Affairs at COCOBOD, Fiifi Boafo, insisted that the aim is to protect the interests of cocoa farmers.

“An economic agreement was signed by all parties within the value chain to ensure that the farmer income – Living Income Differential (LID) of $400 per tonne for cocoa farmers – is protected. It gave us the platform also to look at the key factors affecting farmer incomes especially when the cocoa sector is at risk when a majority of our cocoa farmers are impoverished.”

“This agreement is to ensure that we don’t have the situation where the additional payment of LID is not discounted, and it was well accepted,” Fiifi Boafo disclosed.

This economic agreement follows an earlier accusation by the Chief Executive Officer of COCOBOD, Joseph Boahen Aidoo, against European companies that buy cocoa beans from Ghana and Ivory Coast of deliberately setting conditions that always keep the global prices of cocoa beans down.

According to him, cocoa farmers from the two countries have been made worse off due to unfair pricing regimes dictated by European countries.

Meanwhile, the Ghana COCOBOD and their Ivorian counterpart have made a strong case to major stakeholders in the cocoa value chain who buy cocoa beans from the two countries to increase the price of the commodity to benefit farmers.

According to COCOBOD, even though Ghana and Ivory Coast produce premium cocoa beans in the world, the high quality of the beans is not computed in the price build up.

“We believe that we have a peculiar quality in Ghana and Ivory Coast so that over the years, industry has paid a premium for that. Now the premium is being discounted and it is very disheartening to see the premium being discounted. What it means is that once premiums are discounted then industry is telling us to inform our farmers to also discount the quality of the cocoa, but I don’t think that is what the consumer wants”, he said.