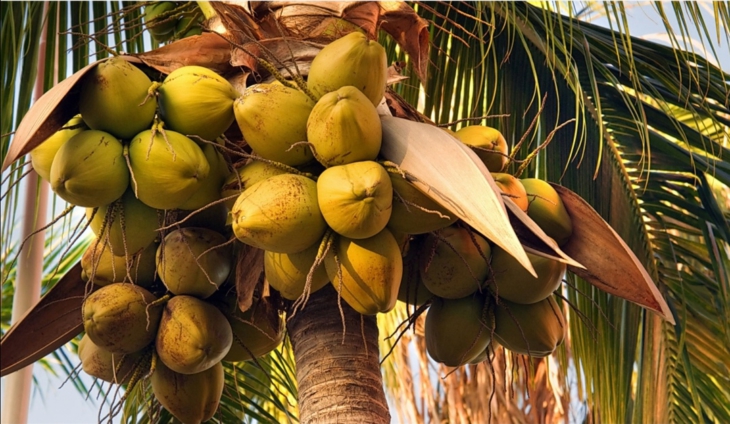 Coconut is said to be the next big export product from Ghana after cocoa. As Ghana’s agriculture sector relies mainly on cocoa for export, an African Eye Report recommends the need for serious diversification.

According to the report published in 2019, another commodity industry watchers can take a critical look at is coconut production.

The report further added that the coconut palm is the most important cash crop in the four coastal regions of Ghana; Greater Accra, Central, Volta and Western.

According to 2011 figures at the Ministry of Food and Agriculture (MoFA), coconut production in Ghana is mainly in smallholdings (0.5-5.0 ha). Out of the annual national production of 224 million nuts, 179 million representing 80% were produced by small-scale farmers from an area of 36 000 hectares of land.

However, yields in smallholder farms were relatively low as the average yield per palm was estimated at 35 nuts per annum.

The cash crop aside from its profitability, research shows that it is highly nutritious and rich in fiber, vitamins, and minerals. It is classified as a “functional food” because it provides many health benefits beyond its nutritional content.

For instance, coconut oil is most respected and highly patronized among the Pacific and Asian population because it possesses healing properties far beyond that of any other dietary oil.

It is extensively used in traditional medicine among Pacific Islanders as they consider coconut oil to be the cure for all illness.

Stakeholders say what makes coconut farming more lucrative is that it does well when grown with other crops. According to experts, the pressure of increasing population has prompted accelerated interest in methods for increasing agricultural production and income from a unit area of land.

This means the demand for coconut around the world is very high.

Coconut farmers are advised to increase their profitability while reducing financial risks by adopting an integrated farming system that includes animals or intercrops.

All these scientifically researched facts make coconut farming attractive and business worthy. There is also a ready market local and international.

For those who may want to venture into the business, the Ghana Export Promotion Authority (GEPA) has opportunities available to support the sector.

In 2018, the GEPA offered ¢600,000 to the Coconut Producers and Exporters Association (COPEA) to enable the Association to undertake large scale coconut production for both domestic and international markets.

The initiative, dubbed, Coconut Export Revitalization Project, according to GEPA, had the Central Region as a start-up point with 60,000 wilt resistant hybrid seedlings.

Additionally, in 2018, a Chinese company, Jiangsu Sanxin Environmental Protection Equipment Ltd, made moves to invest $200m in the production and processing of coconut into a viable commodity in Ghana.

The company, which had conducted feasibility studies and identified the Western Region as its preferred destination, was expected to build a plant for the production of coconut oil from copra and also process the pod of the fruit into activated carbon.

Meanwhile, the Ministry of Agric led by Dr Akoto Afriyie explained that in the past the coconut crop was virtually wiped out by the wilt disease, but the country had been able to get a variety that was resistant to the disease and had a high yield with an early maturity period.

Currently, there are coconut breeds, the dwarf one that starts producing fruits within three years of planting.

The stakes are high and viable so the government should continue to push for the necessary measures and incentives to attract more people, especially, the youth into the production of what seems to be the crop of the moment – coconut.

DISCLAIMER: The Views, Comments, Opinions, Contributions and Statements made by Readers and Contributors on this platform do not necessarily represent the views or policy of Multimedia Group Limited.
Tags:
Africa Eye Report
Cocoa
Coconut
Commodity
Export