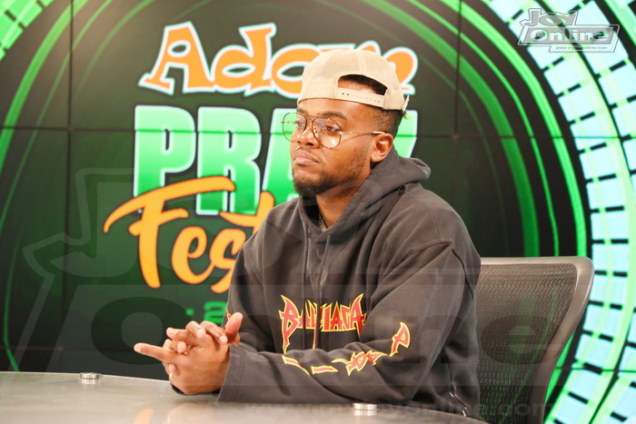 Travis Greene, the multiple Grammy-nominated gospel artiste, has finally touched down in Ghana ahead of the annual Adom Praiz concert that brings together multitudes to praise and adore their maker.

The US-based gospel musician has promised to give off an electrifying and one-in-a-moment stage performance at the Perez Dome as this marks the first time in a long time he set foot in the country.

Talking about expectations tomorrow, the Intentional hitmaker said he is poised to stage a performance that will forever linger in the memories of patrons.

“We did a new project called Take Revival… We will be doing new materials on that project as well. I have been writing and producing, and I am excited to share the old hits and some new songs that have been in the heart,” he said in an interview on JoyNews.

Throwing light on Ghana, he said: “It will be my first time back in Ghana since the pre-pandemic… it’s been about three years since I have been here. This is one of the first countries in Africa that has understood my impact.”

According to him, being married to a Ghanaian also gingers him to love the West-African country.

“The competition about the Jollof rice, the food, culture, and energy… I think Ghana is different and being married to a Ghanaian for me is a special attachment to this region of the world, and I am glad that I am back,” he said.

“Tomorrow is going to be unique. I am bringing all my energy and passion. The proof is that I am sitting in the studio now, and it’s going to be amazing. There is no place on the planet like it. Meet me there, and we are worshipping together,” he said.

The headline artiste, Travis Montorius Kwaku Greene, began his music career in 2007 with the release of The More via Greenelight Records.

He has since released two studio albums, Stretching Out in 2010, The Hill in 2015, and an EP, Intentional in 2015. He also released his live-recorded third album, Crossover: Live From Music City in 2017.

Greene’s music has charted on the Billboard Top Gospel Albums and the Top Gospel Songs charts, and he has been nominated for multiple awards, including five Grammy Awards and 13 Stellar Awards.

Meanwhile, the trendy event is set to happen at the Perez Dome on November 4, 2022, with other renowned Ghanaian gospel musicians such as Ohemaa Mercy, Piesie Ester, Efe Grace and Jackie Ankrah.

The list continues with Celestine Donkor, Perez Music, Jack Alolome and Edwin Dadson among other notable gospel maestros who are eager to shake up the auditorium.

The concert will this time have live patrons in the auditorium as the Covid-19 pandemic forced organisers to hold the 2021 edition in virtual form.

The ticket prices for this year’s event are GH₵150 for two and GH₵100 for singles.

DISCLAIMER: The Views, Comments, Opinions, Contributions and Statements made by Readers and Contributors on this platform do not necessarily represent the views or policy of Multimedia Group Limited.
Tags:
Adom Praiz
Adom Praiz 2022
Adom TV
Travis Greene