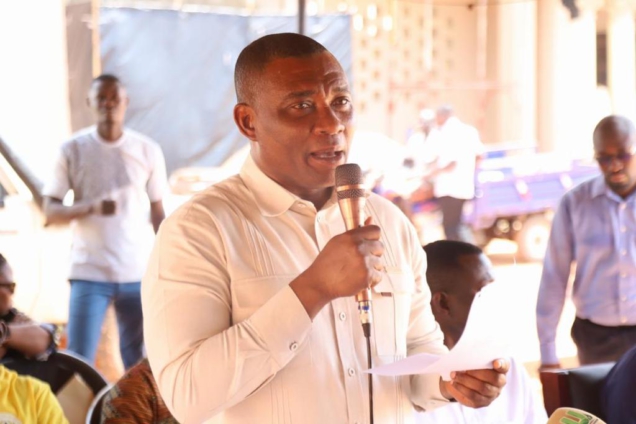 The government through the Ministry of Lands and Natural Resources has embarked on a campaign to sensitise the public and invigorate their interest in the fight against galamsey.

The first of such community engagements was held on Monday, October 24, 2022, with the Deputy Minister for Lands and Natural Resources, responsible for Mining, George Mireku Duker deliberating with the Chiefs, Opinion Leaders, Small Scale Miners and residents of Hemang in the Fanteakwa South District on how they can collaborate with government to eradicate illegal mining.

George Mireku Duker in his address to the gathering, made a passionate call on Nananom and Ghanaians, in general, to liaise with and support government to win the fight.

According to him, the government’s resolve to fight illegal mining is not borne out of personal interest but rather in the interest of Ghanaians and unborn generations.

Stressing on the need for the public to throw their weight behind the government, Mr. Mireku Duker espoused that “a win against illegal mining is a win for all so let’s all come together and do this”.

Allaying concerns about unemployment and livelihood issues that could emanate from government’s fight against illegal mining, George Mireku Duker outlined an alternative livelihood program introduced by government to solve these challenges.

He mentioned the Community Mining Scheme, reclamation and afforestation modules as some of the interventions rolled out by the government to ensure that people who desist from illegal mining operations have something to survive on.

“It’s a shame that we’ve allowed our lands to be destroyed to this point. Long-term enjoyment is better than short term so we must all think about that. People give out their cocoa lands for galamsey money. You’ll get the money but for how long.

“Let us all think about the future. If we all decide to mine responsibly, we’ll enjoy it for the long term and also save our lands and rivers. Government is ensuring that the licensing regime is rigid and well-followed. We need to report all persons engaged in illegal mining.

“Let us protect our lands for future generations. We all must embrace the right form of mining. We’ll continue to sensitize and educate the public on the need to protect our resources. All Ghanaians must know that mining can be beneficial to us but must be done the right way. The sensitization is key to solving the menace,” he said.

The District Chief Executive Officer of Fanteakwa South, Ernest Ofosu noted with optimism that the engagements with the chiefs and residents of Fanteakwa will yield immediate and long-term fruits.

He appealed to his people to pick nuggets from the programme and help government win the fight against illegal mining.

The Chief Inspector of Mines at the Ministry of Lands and Natural Resources, Mr. Kofi Adjei urged the people, especially cocoa farmers not to give out their lands for ‘galamsey’ activities.

He said illegal mining is dangerous and comes at the cost of many innocent lives.

DISCLAIMER: The Views, Comments, Opinions, Contributions and Statements made by Readers and Contributors on this platform do not necessarily represent the views or policy of Multimedia Group Limited.
Tags:
Galamsey
George Mireku Duker