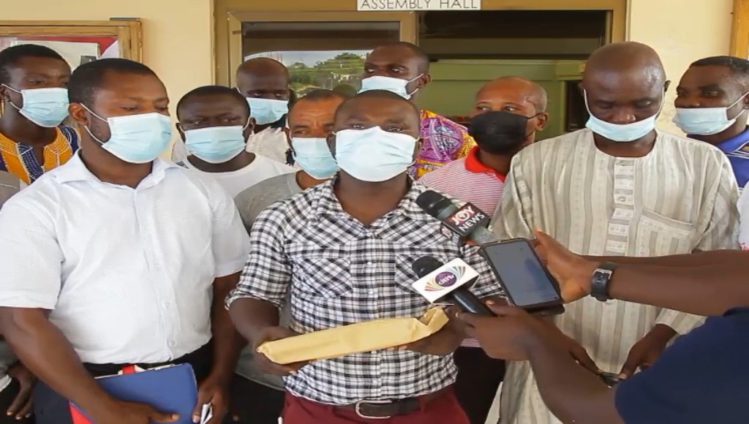 The group numbering over 20 says, they can no longer keep the money the president’s nominee ‘gifted’ them prior to the voting process because they want to protect their integrity and maintain their firm stance at protecting the progress of Cape Coast.

At a news conference at the premises of the metro assembly on Thursday, October 7, spokesperson for the group, Usman Abbam Egyin, indicated, the speculations that they have gone to collect money from the president’s nominee and still voted against him was denting their image.

There were speculations that the NDC assembly members were gifted ¢3000 while their counterpart in the NPP were given ¢2000 by the nominee’s team.

These speculations, the group says has tarnished their image gravely.

“This is the envelop and we are making sure we deliver the full amount to Ernest Arthur, the president’s nominee that we don’t need the money.”

They say they resolved to vote for whoever the president nominated but sadly, they can’t come to terms to vote for Ernest Arthur because his attitude does not bode well for the people in Cape Coast.

Ernest Arthur has failed twice to secure two-thirds of the votes cast by the assembly members. The situation made the president renominate him and voting is expected to be done on Monday.

The assembly members advanced reasons why they voted against Ernest Arthur and why they would vote against him over and over again.

“We are guarding against future violence and insecurity of the people of Cape Coast, as well as 2024 general elections.

“Again, we took this firm stance on the background that the gentleman in question has a bad attitude towards elders and the people of Cape Coast as well as the technocrats he’s working with,” they alleged.

They continued, “He executed projects without recourse to the assembly. We are also worried and sympathize with our colleagues whose appointments he revoked without any reason.

Finally, and more importantly, we are here to return monies the presented to us, the concerned assembly members as gifts to lure us to vote for him since we did not fulfil his will,”

They further explained that what he gave them were gifts; and they did not demand any money. “He gave them to us as gifts. Gifts are gifts but we, the concerned assembly members, are here to give it back to him so the people of Cape Coast could stop pointing accusing fingers at us.”
Touching on the timing of the return of the money, the group indicated the timing was good because they want their fellow Assembly members to follow suit and to drum home the point that money given before voting is not a good ethical behaviour.
“We are setting a precedent that we the concerned assembly members in Cape Coast are rejecting this gift so people won’t speculate that they have bought our conscience.”

They also rejected speculations that The MP for Cape Coast South, George Kweku Rickets Hagan, gave each of them $100 in order to vote against the government’s nominee.