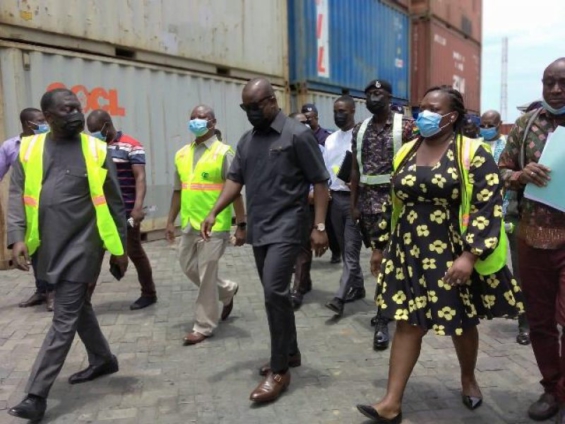 Minister of Lands and Natural Resources, Mr Samuel Abu Jinapor has handed over 13 impounded containers of Rosewood to the National Intelligence Bureau (NIB) in Tema.

Estimated at $234,000 or over GH¢1.4 million, the 13 containers of Rosewood imported into Ghana from Nigeria, suspected for onward export to an overseas destination, were impounded at the Tema Port.

Despite a ban by the government in March 2019 on the harvesting, transportation, importation, and exportation of the endangered tree species in the country, extended in February 2020, the 20-cubic meter containers of Rosewood were illegally imported into the country.

A high-level collaboration and intelligence gathered between the Ministry of Lands and other mandated state agencies led to the confiscation of the containers at the Tema Port.

It was subsequently deposited by Customs at the Overseas Commerce Ghana Limited Terminal-an Uncleared Cargo List (UCL) terminal in Tema.

The Ministry after preliminary investigations revealed that documentation on the banned products showed that a local firm, FELISCO-SUN Company Limited, was behind the illegal trade.

Mr Jinapor, speaking to the media after inspecting the impounded containers and handing them over to the NIB, said government took the issues on the harvesting, importing, and exporting of the endangered species with “utmost seriousness and was dealing with it in a transparent manner and in the context of enormous integrity.”

He said investigations had already commenced and it was clear testimony that the policies, measures and enforcement regime put in place were working, hence the confiscation of the Rosewood by customs working in collaboration with mandated security agencies.

He said the investigations were becoming even wider as the Minister for National Security had been requested to constitute a comprehensive and far-reaching investigation into what he described as a “Cartel of Rosewood”.

The Sector Minister said preliminary information conducted by the Ministry revealed that there seemed to be some importation of Rosewood into the country for purposes of laundering the wood and exporting it out of the country’s ports, and said: “When that happens, it is Ghana that will be discredited and we will vigorously check that”.

He explained that based on the provisions of the Convention on International Trade in Endangered Species (CITES), which Ghana was a signatory to, five countries in the West African Sub-Region were allowed to trade in Rosewood are; Ghana, Mali, Burkina Faso, Gambia, and Senegal.

“We have a strong suspicion that some of these woods, based on preliminary investigations conducted, are imported into our country for onward export,” he added, warning that it would not be countenanced as the National Security architecture was upbeat on nipping the illegal trade in the bud.

He reminded the public that, “there is a ban on harvesting, trading, importation, and exportation of Rosewood” and the ban would be enforced strictly, albeit forcefully to send the right signal.

He said it was about time that some measures were developed to confiscate vehicles found importing or exporting the contraband product and given to the state, adding that it could be a deterrent intervention and the Ministry was considering that amongst other gamuts of remedies.