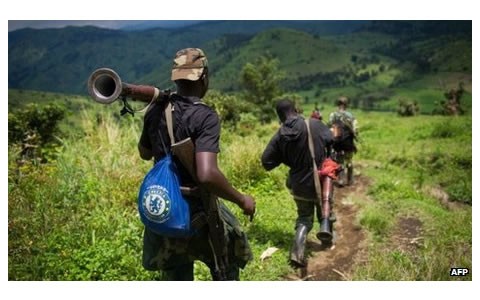 The Democratic Republic of Congo has refused to sign a deal with the rebels it defeated last week, the country's information minister has said.

Lambert Mende said the title of the Ugandan-mediated document was the problem, not its contents.

It should be called a declaration not an accord as that gave too much credibility to the rebels, he said.

The two sides had been due to sign the document in the Ugandan capital, Kampala.

But Mr Mende told the BBC's Focus on Africa radio programme that DR Congo's delegation had now left the talks in Kampala.

He said the Ugandan mediators had refused to accede to DR Congo's request that the document be titled "a declaration".

By calling the document an agreement or an accord, "they are trying to give credibility to criminals", the minister told the BBC.

"You sign an agreement with a body that is legitimate and that exists. The M23 is not legitimate: on the contrary it is a criminal group – labelled as such by the international community.

It was also a question of the government's credibility in the eyes of the Congolese people – it could not be seen to be signing an agreement on an equal footing with "criminals", Mr Mende said.

"Militarily, we have finished M23 and what is more important for us is to maintain our credibility towards the Congolese people," he said.

Okello Oryem, Uganda's junior foreign affairs minister, did not comment on the accusations, but said he expected it would take a few more days before any deal to be signed, the Reuters news agency reports.

The BBC's Catherine Byaruhanga in Kampala says some Congolese security officials and other delegates are still in Kampala.

Mr Mende said there were 11 points in the document on which both sides agreed.

"We didn't go to Kampala to negotiate, we went to hear the grievances of our compatriots of M23," he said.

Eastern DR Congo has been wracked by conflict since 1994, when Hutu militias fled across the border from Rwanda after carrying out a genocide against Tutsis and moderate Hutus.

According the charity Oxfam, there are currently more than 30 other groups are operating in the east.