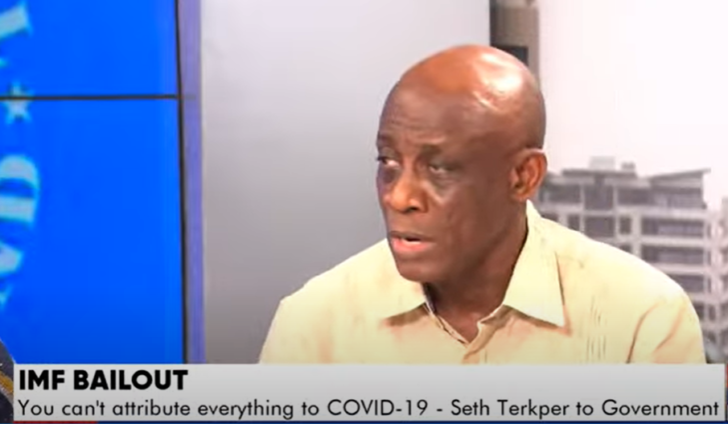 Former Finance Minister, Seth Terkper speaking on the AM Show on Monday, on Ghana's application to the IMF

Former Finance Minister, Seth Terkper, says he is open to joining the Ghana team in the negotiation with the International Monetary Fund (IMF).

Government formally opened negotiations with the IMF from 26/9/2022 with issues about Ghana’s rising debt stock and fiscal status dominating the discussions.

This was after government made a request to the IMF for some financial support for its Enhance Domestic Programme, aimed at dealing with the current challenges facing the economy.

The engagement which will last for about two weeks is expected to end on October 7, 2022.

According to Seth Terkper the only way to get a deal that will not have severe repercussions on the economy is to have a national dialogue.

He believes a national dialogue will ensure consensus building and bring forth solutions to some of the teething problems that face the country as it goes into the negotiation room with the IMF.

Speaking on JoyNews’ PM Express, he noted that in the spirit of goodwill as espoused by Former President, John Dramani Mahama, he would join such a national dialogue if he is invited to.

He further encouraged all and sundry to do same for the greater good of Ghana.

“So it’s not new to me and… I said President Mahama has made that call already and I believe that he made it in good faith so all Ghanaians should join,” he said.

Meanwhile, the International Monetary Fund (IMF) has announced that its economic programme with Ghana will focus heavily on debt sustainability.

This was captured in a Question and Answer statement issued by the IMF as it begins deliberations with the Government of Ghana on an Economic Programme aimed at stabilising Ghana’s economy.

The IMF also added that the programme will support the credibility of government policies, restore confidence in the central bank’s ability to manage inflation and accumulate foreign exchange reserves to help the local currency withstand headwinds.

On the Fiscal sector, the IMF noted that an important policy objective would be to increase revenues, critical for debt sustainability while safeguarding spending on health, education, and social protection.

DISCLAIMER: The Views, Comments, Opinions, Contributions and Statements made by Readers and Contributors on this platform do not necessarily represent the views or policy of Multimedia Group Limited.
Tags:
IMF negotiation
Seth Terkper