Conte ‘positive’ about VAR after Carabao cup draw with Arsenal 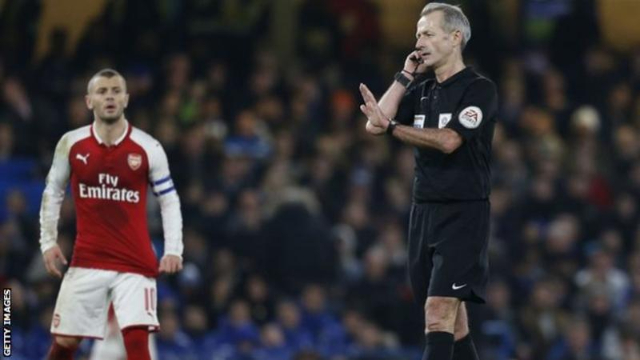 Referee Martin Atkinson consulted the VAR on two Chelsea penalty claims, when Victor Moses tangled with Ainsley Maitland-Niles in the first half and for Danny Welbeck's last-minute challenge on Cesc Fabregas, but he was satisfied enough with the evidence relayed to him not to award a spot-kick.

"I am very positive about VAR because when there is a big doubt during the game it is right the referee and the other referee watch the video to check and make the best decision," Conte said.

"I think everyone wants less mistakes during the game and I think this could be very positive for sure."

The two sides will meet in the second leg at Emirates Stadium on 24 January after Arsenal showed resilience following Sunday's FA Cup third-round defeat by Nottingham Forest to frustrate a strong Chelsea team.

"It was a good performance," Gunners manager Arsene Wenger said.

"We were well organised. It was a good draw and we have to finish the job."

Arsenal were the beneficiaries of careless Chelsea finishing, with Fabregas and Andreas Christensen culprits with poor headed efforts, while keeper David Ospina saved well from Moses and Alvaro Morata.

Alexandre Lacazette blazed Arsenal's best chance over the bar in the first half but there was no doubt they were happier with the result to set up the second leg at Emirates Stadium.