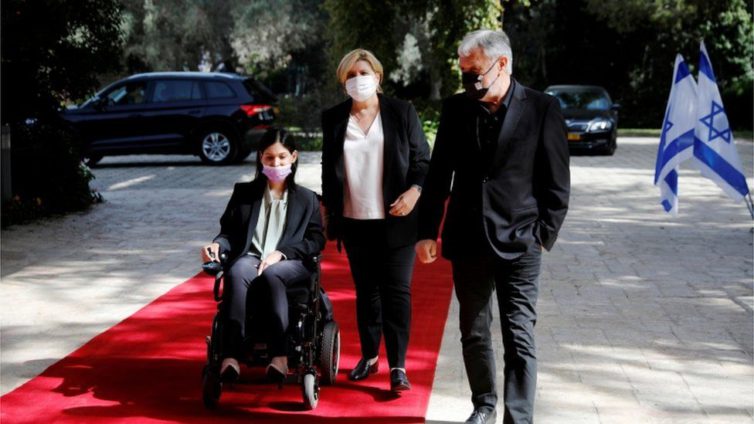 Karine Elharrar, left, said she could not access the conference grounds on Monday (file pic)

An Israeli minister has said she could not attend the COP26 summit on Monday because it was not wheelchair accessible.

Karine Elharrar tweeted that it was “sad” the UN “does not provide accessibility to its events”.

An official in Israeli Prime Minister Naftali Bennett’s delegation said they had formally complained to organisers.

Mr Bennett said he would not attend on Tuesday if Ms Elharrar could not access the summit, the official added.

UK ambassador to Israel Neil Wigan tweeted that he had apologised “deeply and sincerely” to the minister.

“We want a COP Summit that is welcoming and inclusive to everyone,” he wrote.

Ms Elharrar reportedly told Israel’s Channel 12 that she could not get onto the grounds of the conference because the only options were to either walk or take a shuttle that was not suitable for a wheelchair.

Her office told the Times of Israel she waited outside the venue in Glasgow for two hours, and she was eventually forced to return to her hotel in the Scottish capital Edinburgh 80km (50 miles) away.

James Cleverly, a UK foreign office minister, said he was “deeply disappointed and frustrated” Ms Elharrar could not access the summit.

“The COP venue is designed to be accessible for all. I have spoken to the Minister about this and I look forward to meeting her tomorrow,” he tweeted.

An official in the Israeli PM’s delegation said Mr Bennett had told UK Prime Minister Boris Johnson about the incident, and Mr Johnson had invited Ms Elharrar to join a meeting between the two prime ministers on Tuesday.