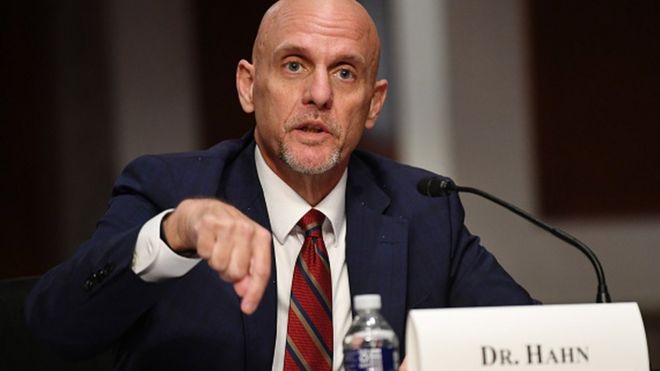 The head of the FDA, Dr Stephen Hahn, said he "can't predict when a vaccine will be ready"

The head of the US drugs regulator has cast doubt on President Donald Trump’s prediction that a Covid-19 vaccine will be ready this year.

“I can’t predict when a vaccine will be available,” US Food and Drug Administration (FDA) Commissioner, Dr Stephen Hahn, said on Sunday.

Dr Hahn said vaccine development would be “based upon the data and science”.

A vaccine would train people’s immune systems to fight the virus, so they do not become sick.

Dr Hahn, a member of the White House coronavirus task force, was asked about the timeframe after President Trump suggested that a “vaccine solution” to the pandemic would be ready “long before the end of the year”.

“I want to send our thanks to the scientists and researchers around the country, and even around the world, who are at the forefront of our historic effort to rapidly develop and deliver life-saving treatments and ultimately a vaccine,” Mr Trump said during his Independence Day address at the White House.

“We are unleashing our nation’s scientific brilliance and we’ll likely have a therapeutic and/or vaccine solution long before the end of the year.”

The president has been criticised for his comments on vaccines and treatments during the coronavirus epidemic, which has claimed the lives of almost 130,000 people in the US.

In recent days, infections have been rising at a record rate in western and southern states, bringing the total to more than 2.8 million nationwide.

The head of the World Health Organization (WHO), Dr Tedros Adhanom Ghebreyesus, warned in June that scientists may never be able to create an effective vaccine against the coronavirus.

“The estimate is we may have a vaccine within one year,” the WHO chief said. “If accelerated, it could be even less than that, but by a couple of months. That’s what scientists are saying.”

Other experts have suggested a Covid-19 vaccine will not be available until at least mid-2021.

What did Dr Hahn say?

In an interview with ABC News on Sunday, FDA chief Dr Hahn said “we are seeing unprecedented speed for the development of a vaccine”, but did not elaborate on a timeline for its availability.

“Our solemn promise to the American people is that we will make a decision based upon the data and science on a vaccine, with respect to the safety and effectiveness of that vaccine,” he said.

NEW: FDA Commissioner Stephen Hahn stops short of backing Pres. Trump's timeline suggesting a COVID-19 vaccine could be available “long before the end of the year," telling @MarthaRaddatz, "I can't predict when a vaccine will be available." https://t.co/ZE8g5QL7d2 pic.twitter.com/FnvLjnGNPk

In another interview with CNN, Dr Hahn said he would not comment on Mr Trump’s assertion that 99% of Covid-19 infections were “totally harmless”.

“I’m not going to get into who is right and who is wrong,” he said of Mr Trump’s remark, also made in his Independence Day speech.

The global fatality rate among Covid-19 patients is estimated to be relatively low, differing from country to country. In March the head of the WHO said about 3.4% of reported Covid-19 cases had been fatal globally.

While most patients with Covid-19 have mild or moderated symptoms, around 20% require oxygen, according to the WHO.

What progress has been made on a vaccine?

A vaccine would normally take years, if not decades, to develop, but scientists across the world are doing their best to fast-track efforts.

There are around 120 vaccine programmes currently under way. Oxford University and Imperial College London have both started human trials.

US health officials have expressed cautious optimism that a vaccine will be in production by the end of 2020 or early 2021.

Earlier this week, the US’s top infectious diseases expert, Dr Anthony Fauci, said the safety and effectiveness of a vaccine against Covid-19 should be known by “early winter”.

Dr Fauci said trials of various vaccines would be entering the latter stages of the testing process this month.

“We may be able to at least know whether we are dealing with a safe and effective vaccine by the early winter, late winter, beginning of 2021,” said Dr Fauci, the director of the National Institute of Allergy and Infectious Diseases.

DISCLAIMER: The Views, Comments, Opinions, Contributions and Statements made by Readers and Contributors on this platform do not necessarily represent the views or policy of Multimedia Group Limited.
Tags:
Coronavirus
FDA
Trump
Vaccine