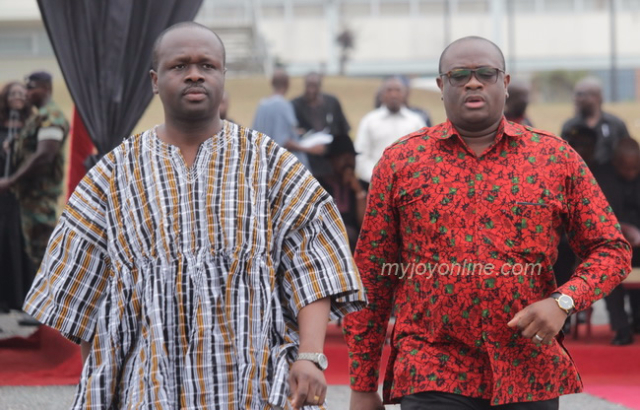 Two of former President John Mahama's close confidantes have been identified as his Achilles heel following the National Democratic Congress (NDC)'s defeat in the 2016 general elections.

Former Communications Minister, Dr Omane Boamah, and Presidential Staff Stan Dogbe are mentioned in the Prof Kwesi Botchwey report which investigated the party's fall from power after 8years in charge.

In interactions with sections of the press, the investigative committee was told, "doing away with Omane Boamah and Stan Dogbe could have earned the president one million votes so he didn't have to look to Ashanti region".

The reference to Ashanti region is because the NDC unveiled a bold plan to snatch one million votes in the stronghold of its rival, the New Patriotic Party (NPP).

The NDC presidential candidate eventually got 497,235 votes representing 23.02 percent, a drop in his 2012 performance of 28 percent.

Bad blood between presidential staffer Stan Dogbe and the media is public knowledge with vocal media houses at the time pushing for his sack particularly after he smashed a journalist's recorder.

Feedback from the Committee's media interactions pointed to the intolerance of the President's inner circle.

"When you criticise the president, you are condemned", the report noted.

The two "shadow actors", Dr Omane Boamah and Stan Dogbe reportedly convinced the president that he is "more popular than the NDC ticket".

Following his defeat, the former President has suggested the party was a "lame horse" and that party supporters should be concerned about healing the horse rather than who next would ride it, alluding to a race for flagbearership of the party.

This view of his defeat may synchronise with the report's claim that Dr. Boamah and Stan Dogbe fed the president with delusions of grandeur.

But the two would point out that there is a media cabal against the Mahama administration which contributed to the President's downfall.

The report also revealed how vehicles meant for the Presidential Press Corps were not given to them to which Mr Boamah denied knowledge of.

Dr Omane Boamah said he has “absolutely no idea” about the claims in the Kwesi Botchwey report intercepted by Joy News.

When newspapers started serialising contents of the report and cited him, the former Communications Minister caused his lawyers to write to the National Executive of the NDC for a copy in order to appropriately defend himself.

He doubted the contents as published.

He nonetheless dismissed the claims he partly caused the defeat of the party, insisting he did his job as he possibly could.

He described the claim of diverting cars for journalists at the presidency and other allegations as "lies which have been peddled over a period by some journalists [and] some politicians.”

Editor's Note: Our earlier version of the story did not reflect Dr Omane-Boamah's views which we deeply regret.