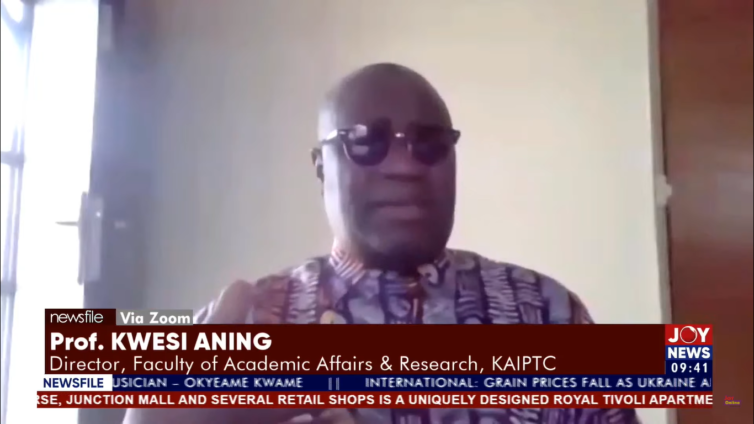 Director of the Faculty of Academic Affairs and Research at the Kofi Annan International Peacekeeping Training Centre (KAIPTC) has likened corruption to a glue that binds the country together.

His comment comes after the Ghana Statistical Service (GSS) unearthed the extent of corruption in the country in its latest survey.

Titled ‘2021 Ghana Integrity of Public Services Survey’, GSS revealed that Ghana lost ¢5 billion in cash through the payment of bribes to both private and public officials in 2021 in order to access basic services.

The latest report also indicated that 26.7% of public sector officials were engaged in bribery acts, whilst 9.1% were officials from the private sector.

Although Prof Aning said he is not surprised by the findings, he decried the extent of the canker.

Speaking on JoyNews’ Newsfile on Saturday, the security analyst noted that corruption creates a serious threat to national security.

“And I think the critical aspect is that this is a problem; we’ve quantified it and we have brought it and we’ve brought it down to developmental terms. How many schools, roads, clinics can we build with this money.

“Also the fact that, this cuts across different shades of individuals and institutions. So yes, Corruption creates insecurity and creates a sense of social injustice. It creates inequality in societies,” he noted.

Prof Aning further commended the Statistical Service for providing such a scientific data for reference as far as graft is concerned.

“I think this report quantifies in a very practical commonsensical manner what corruption means and what bribery means. The extent of the problem, the category or categories of individuals and institutions involved.

“So for me, this is one of the few times that a state agent is bold enough to scientifically prove this allegation that people have been engaging in,” he noted.

Prevalence of bribery in Ghana

The survey revealed that, on average, there is no difference in the prevalence of bribery in rural and urban areas of Ghana. There are, however, sizable variations across the 16 regions of the country.

On regional basis, the prevalence of bribery in the Bono East, Savannah and Volta regions, for example, were substantially lower than the national rate. The three regions recorded corruption cases of 11.8%, 14.5% and 19.1% respectively.

In the Western North, Ahafo and North East regions, the corrupt cases reported were substantially higher, at 53.4%, 47.0% and 41.9% respectively.