Rwandan buses are among the first in Africa to switch to cashless payment. Chris Matthews asks what will become of the bus conductor.

Snaking through the green streets of Kigali, as a stream of motorbike taxis, known as motos, fly along the hilly roads, the 109 bus is making its familiar route west to the suburb of Gikondo.

It is early afternoon and the bus is full, a group of school children are picked up en route, an elderly man is offered a seat as he joins the busy service and, while the route may be the same, boarding is not.

The 109 bus is one of a growing number of services and one of more than 130 buses in the Rwandan capital to have introduced cashless payments.

Since November, smart card machines have been fitted on two of Kigali's bus operators. The third is following in the coming weeks and more than 60,000 people have signed up – the 109 was one of six initial services to go entirely cashless in February.

One of those onboard the 109 using the new "Tap&Go" card, designed by Kigali start-up AC Group, is Remy Mwumvaneza, a marketing professional who uses it in his commute. He says the technology is improving the city.

"I think it will help because if you have this it makes travelling easier and if you don't have change you can just put it on this."

It is hoped switching to a card-only system, also fitted on mini-van buses, will not only improve efficiency on Kigali's public transport but help operators recoup the money lost with traditional cash payments.

"We had definitely identified there is a need," AC Group Chief Operating Officer Philip Ngarambe says.

"The common problem all operators face is that they lose a lot of revenue.

"By the time it gets to the company there is so many hands it has gone through – from the conductor, to the bus driver, to the person collecting it, to taking it to finance and the bank account – you have lost maybe 40% to 50% of your revenue by the end."

The company, founded by Patrick Buchana, now employs more than 30 staff at its Kigali offices.

Mr Ngarambe moved to Canada aged eight and returned home to Kigali in 2010 keen to contribute to the country's economic development and also follow in his father's footsteps.

"My father was actually the first Rwandan to start an airline company in Rwanda and cargo as well," the University of Toronto graduate explains.

"I always used to travel a lot with him and I used to love the logistics and all the things behind it."

He says living abroad gave him an opportunity "to go into the future and see what that is and then coming back home". 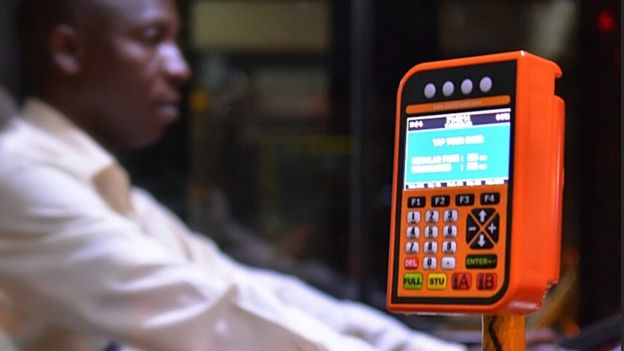 There were other reasons to go cashless.

The cash system was delaying the buses, according to AC Group's chairperson Charles Ngarambe, who is not related to Philip.

"The use of smart card not only saves time, but also protects the environment and keeps the city clean as we will have gotten rid of paper tickets," Mr Ngarambe says.

It is the latest in a string of initiatives to promote a cashless economy.

Mobile money is taking hold and even motos are starting to "Uberfy" services across the city.

Government payments are also being digitised, as part of its Smart Rwanda Master Plan (SRMP) launched in November;

All government financial transactions will be electronic by 2018, government services are moving online and close to 100,000 jobs will be created as a result.

"For a country like ours which is landlocked, we know that ICT is going to help us drive our knowledge-based economy," Finance Minister Claver Gatete tells the BBC at the African Transformation Forum in Kigali. 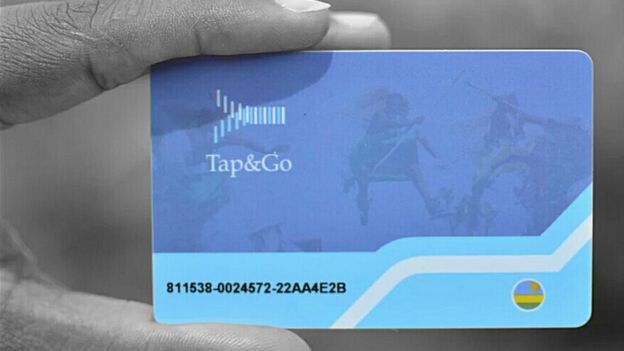 Rwanda's economy is on an upward trajectory.

The country has averaged 7.5% GDP growth over the past decade, its services industry has overtaken agriculture as the main earner and technology is viewed as a key growth component by President Paul Kagame's government.

"It is affecting everything," Mr Gatete adds.

The local start-up aims to improve road safety on the city's motos by allowing people to book approved moto drivers.

The recently-launched Taxi250 is delivering Rwanda's own Uber-like taxi service.

The e-payment firm MobiCash has several government contracts and is increasing online services with local banks.

"In terms of economic growth, I think technology has a big part to play," says Solomon Assefa, director of IBM-Research Africa.

"If you, from the start of your development, can integrate these technologies you are actually driving jobs and your economic transformation and you are saving quite a lot."

AC Group is hoping to grow its services too.

Buses are fitted with GPS for operators to manage their fleet, monthly passes will be introduced in May, vehicle locations are to be displayed at bus stops and talks have started with banks so debit cards can be used.

A similar initiative was started in nearby Kenya in 2014 with thousands of buses in Nairobi adopting the system, although problems have followed with reports of broken systems and congestion issues.

The promotion of technology and cashless economies is much trumpeted across Africa – mobile money system M-Pesa is the most notable success story – but Philip Ngarambe admits there are challenges.

"The conductors definitely were not happy because you are tapping into their 40%," he says.

"If the company is gaining these revenues it is easy for the owners to say: 'Let's increase the salaries because now we are receiving revenue, let's invest in healthcare for the workers'." 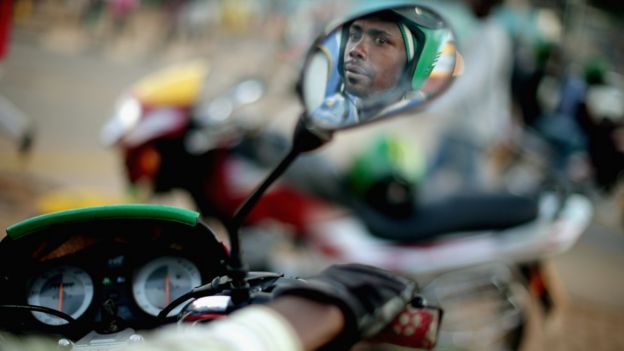 The move to cashless payments could lead to job losses for conductors but he says the company hopes to re-train them as Tap&Go sellers, many of whom operate on streets and at bus stops throughout Kigali.

AC Group wants to expand beyond Kigali in the future and Philip Ngarambe says there has been contact from governments across Africa about the system.

Whether the technology can be adopted throughout the country and benefit all of society remains to be seen, but the wheels are in motion for Rwanda's cashless economy.

"I'm not starting no airline but I think this is a big opportunity," Mr Ngarambe says.

"We are heading for a brighter transport system."