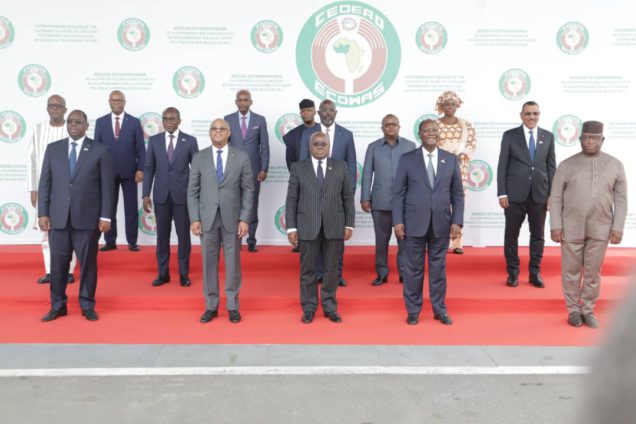 President Akufo-Addo is the Chairman for ECOWAS

The Director at the Faculty of Academic Affairs and Research at the Kofi Annan International Peacekeeping Training Centre (KAIPTC), Prof. Kwesi Aning, has suggested that the intelligence assessment conducted by the Economic Community of West African States (ECOWAS) to avert possible military takeovers in African countries, lacks quality.

Speaking on JoyNews‘ Newsfile, Prof Aning noted that due to the anomaly, ECOWAS has not been able to prevent the escalation of political tension as seen in the sub-region since the military takeover in Mali.

According to him, a proper assessment may reveal massive support for military takeovers since the average citizen bemoans his or her deteriorating economic life while the elite enjoy themselves.

“Critical risk assessment are not tolerated. The African Union Commission is supposed to be a technocratic super national commission in which the staff must make critical assessment based on data. But because it’s a member states organization and ambassadors are sensitive to their countries being put on the block, there is a tendency to draw conclusions that do not speak to the reality on the ground. It is the same thing with the quality of intelligence assessment in our member countries.

“For example, when ECOWAS Heads of State meet, what is the quality of intelligence assessment that are placed before them? So that whiles they are focusing on Mali, they would have known that Burkina Faso is boiling, that Guinea Bissau also has problems.”

“There lies the publics apparent support for the military incursion. There is absolutely no doubt in my mind that most people prefer a democratic dispensation but we are speaking with two voices. We are pulling in two directions in which there is a tiny political, economic, social elite that has increasingly become oblivious to the pain, suffering and frustration of ordinary people,” he added.

Prof. Aning, interacting with host, Samson Lardy Anyenini on Saturday, February 5, stressed that “unconstitutionality is not only about when the military takes up arms.”

“It is also about when democratically elected Presidents play games or fiddle with constitutions, prevent the media from playing its free role, prevent opposition parties from working and are unable to translate the democratic dividends into jobs, education, health, housing and allow corruption to blow”.

His comments come after an attempted military takeover in Guinea Bissau on Tuesday, February 1 whiles ECOWAS works to restore Mali and Burkina Faso back to constitutional rule.

President Umaro Sissoco Embalo managed to foil the attempts of the military unlike his colleagues in Mali and Burkina Faso.

The ECOWAS has called on the military leaders in Burkina Faso and Mali to return the countries back to constitutional rule.

But according to Associate Professor of Law at the University of Ghana, Kwadwo Appiagyei Atua, the calls by ECOWAS are not enough to generate the desired outcome.

“If you look at how when there is a coup d’etat, ECOWAS and so on rush to have meetings and conclude by saying ‘we condemn the coup d’etats, the new regime should return the country to constitutional rule, it is not enough.”

Rather than reversing the states to democratic governance, Mr Atua on the show stated that “the soldiers are emboldened to engage in these coup d’etats.”

“They rely on the concept of securitization, saying that there is a security threat. That is the song the coup d’etats makers in Mali sang. That is what Burkina Faso is saying,” he added.