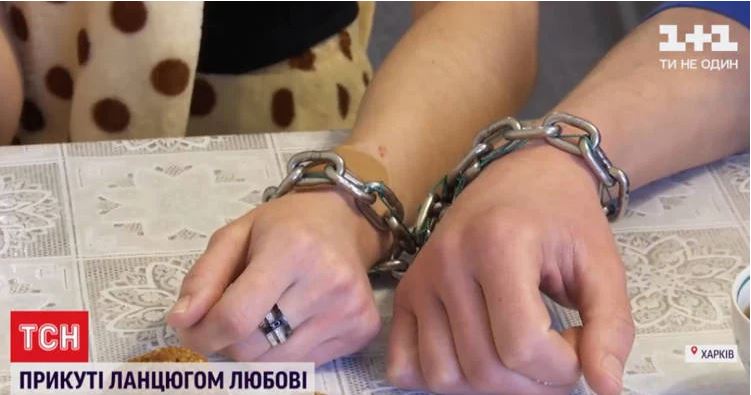 A young Ukrainian couple decided to really put their relationship to the test by linking their hands together with a thick iron chain for a period of three months.

This year, Alexander and Viktoria, a young couple from the Ukraine, decided to celebrate Valentine’s Day a bit differently.

On February 14, they traveled to Kiev to have their hands chained and sealed together by a representative of the country’s national register of records.

Their goal is to literally be next to each every moment, for the next three months. That includes sleeping, bathing together and, obviously, even going to the toilet together.

“We are going for a record,” Alexander told Ukrainian reporters. “There is a chain on us, and all the links are welded. The final link is closed with the seal of the national register of records.”

The young pair said that they are confident they can last the three months chained together, but if they decide to call it quits before reaching their goal, they’ll need someone to cut the chain off with a special cutting tool, Vitaly Zorin, of Ukraine’s national register of records, said.

Zorin added that he checked whether Alexander and Viktoria were ‘sane’ before accepting to supervise their romantic experiment.

On February 14, the couple decided to have the chain welded by an actual welder, in front of the Statue of Unity, in Kiev, as a symbol of their commitment to each other.

The young couple will be documenting their experience over the three months, on social media. Their first challenge occurred on their way home from having the chain sealed, when they had to stop for a bathroom break.

They decided to use the ladies’ room, which reportedly got a shocked reaction from the cleaning woman at that particular roadside restaurant.

Over the last few days, Alexander and Victoria have been uploading photos and clips of everyday tasks that are proving challenging in their current predicament. They both have to wear special clothing with lots of zips, take turns using the shower, and have to plan their every action in order to make sure they both get things done.

While the couple may be confident about their ability to last three months chained to each other, there are few who share their optimism. In fact, people on Ukrainian social media are betting on the number of days they will call it quits after.