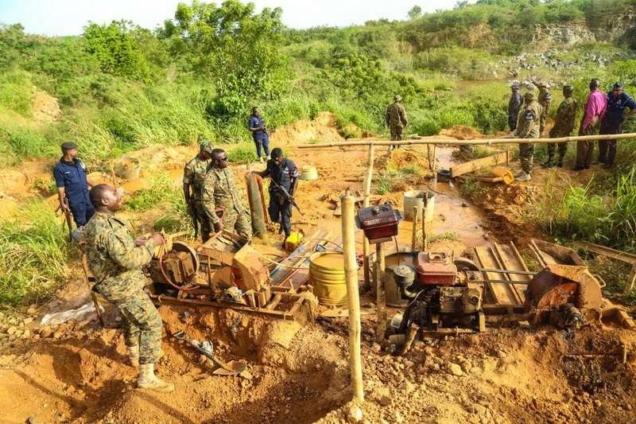 Thirty two alleged national security operatives, arrested for allegedly mining at the Akateng Forest in the Eastern Region, have been remanded into custody by the Koforidua Circuit Court ‘B’.

The court did not take their pleas. They are expected to reappear on May 24.

The court, presided by Mrs Mercy Kotey, said investigations were underway and the accused could interfere with the process when granted bail.

Defence counsels for the accused took turns to pray for their bail.

Mr Theophilus Donkor, who represented 11 of the accused, relied on Article 13, 14, and 19 of the Constitution and Section 96 of Act 30 for bail.

Mr Donkor said his clients had spent eight days in custody and the police, had breached the 48-hour rule.

According to defence counsel prosecution wanted the court to endorse an illegality.

He prayed the court to compel prosecution to give reasons for the accused persons’ remand.

In January, this year, the security services picked up information of the activities of the accused persons, that included they were terrorizing communities in the Eastern Region.

The accused were alleged to have engaged in illegal mining at the Akateng Forest reserve and parading themselves as national security operatives in communities in the Eastern and Ashanti regions.

They were accused of demanding and seizing gold from illegal miners in the name of national security.

Security personnel from Accra and the Regional Police Command were dispatched to the reserve and accused persons were arrested on May 4.