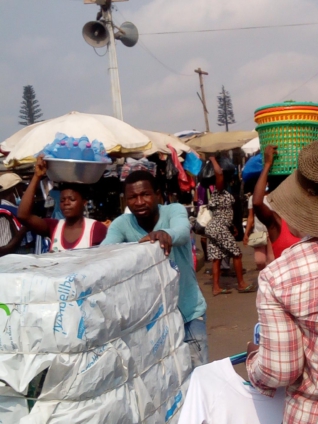 Traders in parts of Accra, continue to disobey Covid-19 safety protocols despite directives from President Nana Addo Dankwa Akufo-Addo for strict adherence to the protocols to contain the spread of the virus.

The traders, mostly in the central business district, sat in close proximity and had no nose masks on when the Ghana News Agency visited the market on Monday.

A few traders, who had their nose masks under their chins, told GNA they were having difficulty in breathing with the masks, “so we removed it occasionally to breathe in fresh air.”

Handwashing stations were also completely out of sight. However, a few people who were buying foodstuffs and other commodities were seen in nose masks.

A trader, Nana Pomaa, who had her sister and three kids with her, said, “Since most traders in the market don’t have their nose masks on, I make sure my children and I wore ours not to contract the virus”.

A dealer in sunglasses, Kwame Asiedu, who had his mask on, asked security personnel to enforce the observance of the protocols in the markets and stations.

In update number 22, of measures taken against the spread of Covid-19, President Akufo-Addo, directed the Inspector General of Police (IGP), Mr James Oppong-Boanuh, to ensure the rigorous enforcement of the law on mask wearing, at all public places, including markets and in public transports.

He said severe punishments existed for persons who broke the law on the mandatory wearing of masks, saying, “Should anyone be arrested by the security agencies disregarding this directive, that person will be dealt with strictly in accordance with the law.”

The President lamented that, “The number of severe cases, which stood at 18 a week ago, had increased to 120 and 33 critical cases in treatment facilities.”

He said the number of confirmed deaths had increased from 338 persons to 352 within a period of two weeks and asked the citizenry to live with the virus responsibly and observe the safety protocols.

DISCLAIMER: The Views, Comments, Opinions, Contributions and Statements made by Readers and Contributors on this platform do not necessarily represent the views or policy of Multimedia Group Limited.
Tags:
Accra
Covid-19 Safety protocols
Traders