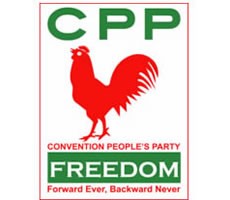 A renewed and reformed CPP has continued with the revival of its organizational traditions with the holding of Family Conventions.

The leadership will use the occasion to thank branch members in each region for their commitment and loyalty to the CPP and its great legacy.

Additionally the leaders will take reports first hand and seek to confirm any resignations in the Region.

The party will also roll out its successful “Friday Freedom Forum” programme to the regions.

The National Chairperson takes to the regions a message on the need for Internal Self Determination and Self Reliance.

The Team will be moving from the Volta Region to the Western Region, followed by the Central and Ashanti Regions by the end of the week. Other regions would follow.