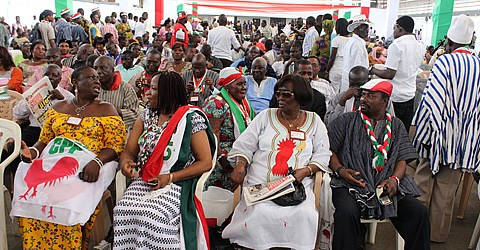 The Central Committee of the Convention People’s Party has postponed its National Delegate Congress from March 8th to Friday 27 and Saturday, 28 March at Kumasi in the Ashanti Region.

The CPP has also slated picking and filing of nomination forms from February 6th to 28 and nominations forms pegged at GHC2,000.00, a statement signed by Mr J. B. Daniels, Acting Deputy General Secretary and copied to the Ghana News Agency in Accra on Wednesday stated.

According to the statement, the Central Committee after an emergency meeting on Tuesday, February 4th decided that prior to the congress, a National Executive Council (NEC) meeting would be held on Friday, March 27 in Kumasi.

Qualification for the flagbearer Aspirants among others stipulates that anyone wishing to contest for the position would have, is to be a member of the party for five years and must be in good standing.

The CPP Central Committee earlier decided to hold a joint Congress for the election of the flagbearer and the National Leadership to manage affairs of the party for the next four years.

According to the CPP Constitution available to the Ghana News Agency, the party shall hold a separate National Delegates Congress to elect the Presidential Candidate of the Party.

On qualification and requirements, the CPP Constitution mandates that persons contesting National Executive positions and contestants for the position of Presidential Candidate must hold a party membership card for five years or more.

Candidates must have paid their membership dues in full, must be registered to vote in national elections, and must be in good standing in the party.

The National Delegates Congress shall be presided over by a member of the Council of Elders appointed for the purpose by the National Executive Council.

It also has the powers to confirm, amend, repudiate or revoke any decision made by any subordinate organ of the Party; and amend or suspend in whole or part any provision of the CPP Constitution by a resolution or in the manner provided in the constitution.

It shall also decide on any proposals or matters, and transact any other business, which shall be submitted by the Central Committee or the National Executive Council.

The congress also shall delegate any of its functions or powers to any subordinate organ of the Party; perform such other functions as necessary for the attainment of the aims and objectives through the appropriate organs of the Party.