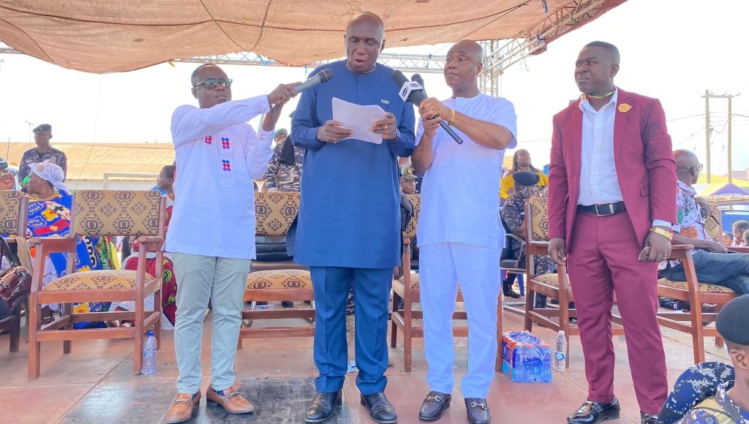 The Minister of the Interior, Mr Ambrose Dery, says the recent arrests of suspected operators of foreign exchange (forex) parallel market are part of measures to rescue the cedi from further depreciation.

He explained that the activities of the illegal black market operators were contributing to the continued weakening of the cedi against major currencies, including the US dollar, thus requiring a crackdown to ensure compliance with Ghana’s Forex laws and regulations.

Mr Dery was reacting to concerns raised by Torgbui Amenya Fiti V, Paramount Chief of Aflao Traditional Area, on the arrest of dozens of forex dealers at the Aflao Border on November 10.

Torgbui Fiti made the comment during the recent 25th Anniversary of his coronation and the climax of the annual Godigbe Festival of the people of Aflao.

Mr Dery said: “We’re all aware of the falling cedi to the dollar and it’s the disorder and lawless way in which foreign exchange is being done in Ghana.”

“It’s not done anywhere that you can get foreign money/exchange without telling us how you got it. How could you go to a place without providing an identity and you can change money?”.

“The lawlessness in that is also contributing to the falling cedi and the Bank of Ghana has decided to ensure that it brings sanity. I’ll assure you, all those who are acting lawfully will be allowed to operate but all those operating illegally will be stopped.”

Mr Dery said it is in the same spirit of arresting the cedi’s free fall that the Central Bank has withdrawn forex support for the importation of some foods that could be produced locally, including rice and vegetable oil.

The Minister promised to forward Torgui Fiti’s concerns, but said it was important to explain the reason for the arrest.

He assured that the country’s borders would remain open as the government is committed to the ECOWAS border protocol, but urged all stakeholders to cooperate with security agencies to keep the peace and security of the nation.

DISCLAIMER: The Views, Comments, Opinions, Contributions and Statements made by Readers and Contributors on this platform do not necessarily represent the views or policy of Multimedia Group Limited.
Tags:
Black market operators
Cedi Depreciation
Interior Minister