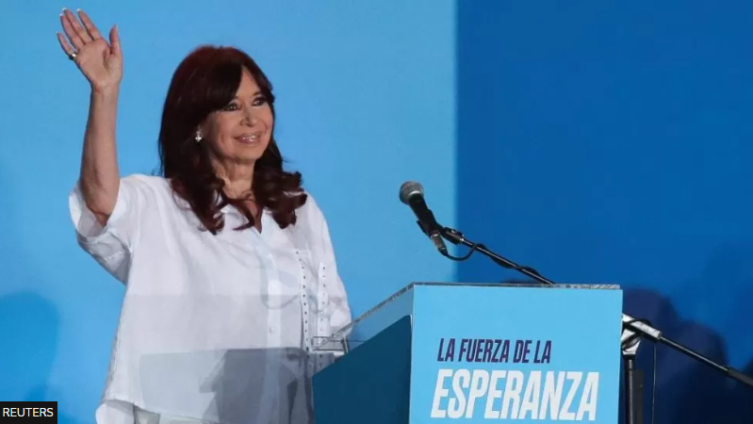 A court in Argentina has sentenced Vice-President Cristina Fernandez de Kirchner to six years in jail for corruption in a case that has shaken the country.

Fernández, 69, was found guilty of “fraudulent administration” over the awarding of public works contracts to a friend.

But she is unlikely to serve jail time.

Fernández has some immunity via her government roles and is expected to launch a lengthy appeals process.

She has also been banned from public office for life, but will continue in her role as vice-president while the case goes through higher courts.

Fernández said the charges against her were politically motivated. Speaking after the verdict, she described herself as the victim of a “judicial mafia”, the Associated Press news agency reports.

Prior to the ruling, she had also accused the prosecutors of lying and slandering her.

It is the first time ever that a vice-president has been convicted of a crime while in office in Argentina.

Prosecutors said Fernández had led an unlawful partnership during the time when she was president of Argentina from 2007 to 2015.

They said she had created a kickback scheme which steered lucrative public work contracts towards a friend of hers in return for bribes.

Eleven other people were on trial. Seven were found guilty and sentenced to between three and a half and six years in prison, three were released and one had their case dismissed.

The prosecutors said that they uncovered irregularities in dozens of public work tenders awarded in the southern province of Santa Cruz, Fernández’s political stronghold. Many of the construction projects were never completed.

Prosecutor Diego Luciani described it as “probably the biggest corruption operation the country has known”.

He also said the alleged kickback scheme had caused the Argentine state a loss of at least $1bn (£818m).

Fernández had vehemently denied all the allegations against her.

The case has proven highly divisive in Argentina, where supporters of Fernández – a populist politician – love and hate her in equal measure. Supporters took to the street outside her apartment in Buenos Aires to show their backing for the vice-president. At times, they have faced off with critics of Fernández, who accuse her of being a “thief”.

It was during one of these gatherings on 1 September that Fernández became the target of an assassination attempt.

A 35-year-old man pointed a gun at the vice-president’s head, but the weapon jammed as he aimed it at her.

The man has been charged with attempted murder.

Even though she has been found guilty and sentenced to a jail term, Ms Fernández will not be sent to prison immediately.

As an elected senator, she enjoys a degree of immunity which means that she will be able to remain free and continue in her post while she appeals against the verdict all the way to the Supreme Court.

As the appeal process could take years, she is expected to be able to run again for the senate or even for the presidency in the 2023 election.

DISCLAIMER: The Views, Comments, Opinions, Contributions and Statements made by Readers and Contributors on this platform do not necessarily represent the views or policy of Multimedia Group Limited.
Tags:
Argentina
Corruption
Cristina Fernandez