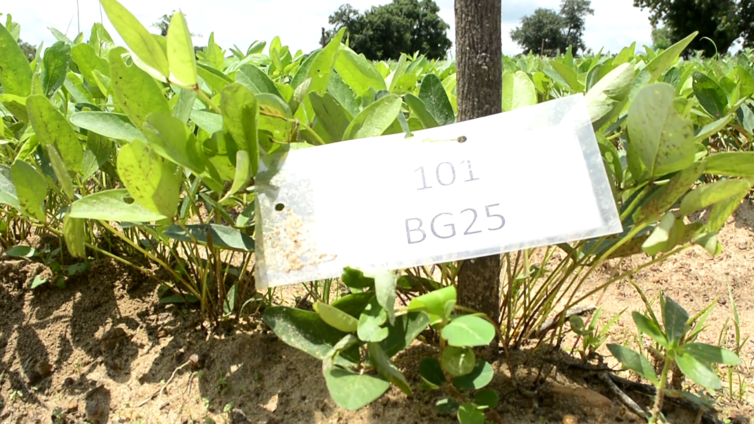 The Bambara Groundnut is a traditional food crop largely cultivated by farmers in the northern parts of Ghana.

It is a leguminous crop sometimes called Bambara Bean and is similar to regular beans or cowpea.

In the Upper East Region, Bambara Groundnut seeds are commonly called Suma and are very important in the traditional settings, mainly because they are used to prepare many foods during the performance of funerals.

They are also used for making pastries like the popular Koose which is consumed with Hausa Koko for breakfast by many Ghanaians.

Bambara Groundnuts can also be cooked fresh or after they have been dried.

Despite the importance of this food crop, farmers in the Upper East Region have over the years, reduced the quantity of Bambara groundnut they cultivate during the farming season.

According to some of the farmers, pest infestations and low yields account for their lack of interest in growing Bambara groundnuts.

“We do not have any chemicals for killing the insects that attack the crops”, said Sule Baalik, a Bambara Groundnut farmer in Binduri.

“Also, when there are torrential rains during the farming season, you are likely to lose your harvest because Bambara Groundnuts do grow well in waterlogged fields”, he explained further.

The Plant Genetic Resources Research Institute of the Council for Scientific and Industrial Research [CSIR – PGRRI] has therefore, introduced some farmer varieties of Bambara Groundnut to farmers in the Binduri and Tempane districts of the Upper East Region for trials on their farms.

The Institute hopes that the move will enable farmers to identify Bambara groundnut types that are suited to their specific farming conditions and encourage more farmers to grow the food crop, as it could contribute significantly to improving Ghana’s food security.

Some of the farmer varieties introduced to the farmers are tolerant to drought and can withstand pest and disease infestation.

They are also high-yielding and have an early maturity period, unlike the traditional varieties previously grown by the farmers.

Acting Director for the Plant Genetic Resources Research Institute of the Council for Scientific and Industrial Research, Dr. Daniel Ashie Kotey said; “The participatory field trials that are being conducted with farmers would lead to farmers selecting Bambara Groundnut genotypes that are suited to their farming contexts”.

“And once they do that, seed producers who are part of the germplasm user groups would come onboard, pick up these seeds and multiply them”, Dr. Kotey added.

He said prior to multiplying the seeds, the Seed Producers will be given training on how to produce quality seed.

The farmer varieties of the Bambara groundnut are being distributed under the Seeds for Resilience [SfR] Project which is being implemented in Ghana and four other African countries under the auspices of the Global Crop Diversity Trust based in Germany.

Patrick Attamah, a plant breeder at the Manga station of the Savannah Agriculture Research Institute of the CSIR, which is the local collaborator for the PGRRI in the Upper East Region explained that one of their core duties is “to select the varieties of Bambara Groundnut that have promise before giving them out to farmers to try on their fields”.

The farmers have welcomed the CSIR – PGRRI farmer varieties of Bambara groundnuts, with high hopes of getting improved yields that could motivate them to go into commercial production of this very important traditional food crop.

“After planting the CSIR – PGRRI varieties on my field, I see a vast difference between those and my own old varieties. Theirs are greener and growing very quickly than mine so I expect an early harvest”, said Barikisu Tahiru, a woman farmer from Tempane.

DISCLAIMER: The Views, Comments, Opinions, Contributions and Statements made by Readers and Contributors on this platform do not necessarily represent the views or policy of Multimedia Group Limited.
Tags:
Bambara Groundnut
CSIR
CSIR-PGRRI
Upper East Region