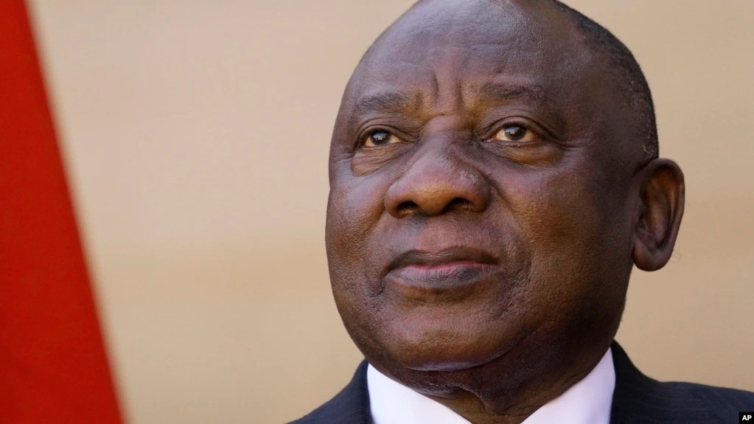 The president has been accused of covering up a $4m (£3.3m) theft from his farm in 2020, including kidnapping and bribing the burglars into silence.

A leaked report from an independent panel has found that Mr Ramaphosa abused his position and may have broken an anti-corruption law.

He has denied wrongdoing, and said the money was from selling buffalo.

The panel’s findings have been handed to parliament, which is set to examine them and decide whether or not to launch impeachment proceedings next week.

Mr Ramaphosa is less than a month away from a conference which will decide if he can run for a second term with his party, the African National Congress (ANC), in 2024. The incident could be particularly damaging as Mr Ramaphosa ran for office on an anti-corruption ticket.

The ANC will hold a meeting with its executive on Thursday, where it is expected that the issue will be discussed.

The Farmgate scandal erupted in June, when a former South African spy boss, Arthur Fraser, filed a complaint with police accusing the president of hiding a theft of $4m from his Phala Phala farm in the north-east of the country in 2020.

Mr Fraser, who is a close ally of former President Jacob Zuma, alleged that the money could have been the proceeds of money-laundering and corruption, and accused the president of kidnapping and bribing the burglars.

Holding such a large amount of money in dollars could violate foreign exchange control laws.

Mr Ramaphosa has confirmed a robbery, but said the amount stolen was less than that alleged, and denied attempting to cover it up.

Some $580,000 which had been paid in cash for buffalo was stolen from under sofa cushions in the farmhouse, he said.

“I did not ‘hunt’ for the perpetrators of the theft, as alleged, nor did I give any instructions for this to take place,” he wrote in a submission to the panel’s report, according to AFP news agency.

The panel concluded that there were many unanswered questions, calling it a “very serious matter”.

Little information was kept about the man who supposedly paid the money for buffalo, it said, adding that he had still not collected the animals two and a half years later.

The panel also said it was strange that the money had been kept hidden in a sofa, rather than in a safe until it could be lodged in a bank account.

“We think that the president has a case to answer on the origin of the foreign currency that was stolen, as well as the underlying transaction for it,” the report said. It added: “The president abused his position as head of state to have the matter investigated and seeking the assistance of the Namibian president to apprehend a suspect.”

Namibian president Hage Geingob has previously denied any involvement in the incident.

DISCLAIMER: The Views, Comments, Opinions, Contributions and Statements made by Readers and Contributors on this platform do not necessarily represent the views or policy of Multimedia Group Limited.
Tags:
Cyril Ramaphosa
Impeachment
South Africa