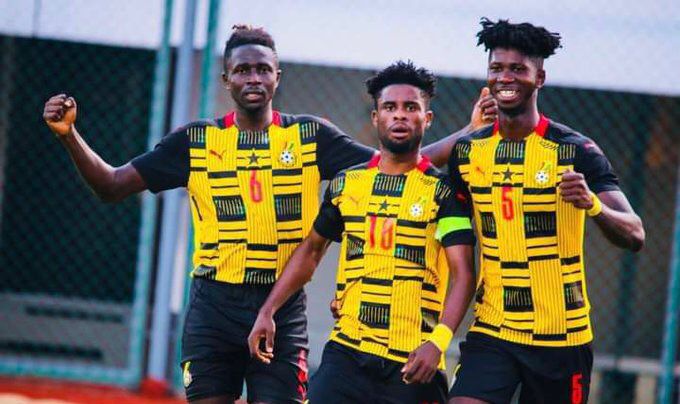 Hearts of Oak star Daniel Afriyie Barnieh scored a consolation for Ghana’s Black Galaxies in their 2-1 loss to the Qatar national team on Tuesday evening.

Annor Walker’s side were two goals down under 30 minutes at the Wiener Neustadt Stadium in Austria in the international friendly match.

The 2022 Fifa World Cup hosts found the opener after just two minutes and scored a second in 26 minutes to end the first-half 2-0 ahead of Ghana.

After a poor start to the game, the Black Galaxies came into the second-half playing better than they did in the first period. The Black Galaxies were rewarded with a consolation in the 68th minute.

Hearts of Oak forward Daniel Afriyie scored from a rebound; his initial shot that was blocked came off his body into the net to make it 2-1.

Qatar held on to win 2-1 as they sharpen their team for this year’s World Cup in the Gulf country.

The game will serve as a test for the Black Galaxies who will face Nigeria in the 2023 CHAN final round of qualifiers.

The first leg is set to be played in Ghana on August 28 and the return fixture on September 1 at the Moshood Abiola Stadium in Abuja.

DISCLAIMER: The Views, Comments, Opinions, Contributions and Statements made by Readers and Contributors on this platform do not necessarily represent the views or policy of Multimedia Group Limited.
Tags:
Austria
Black Galaxies
Qatar