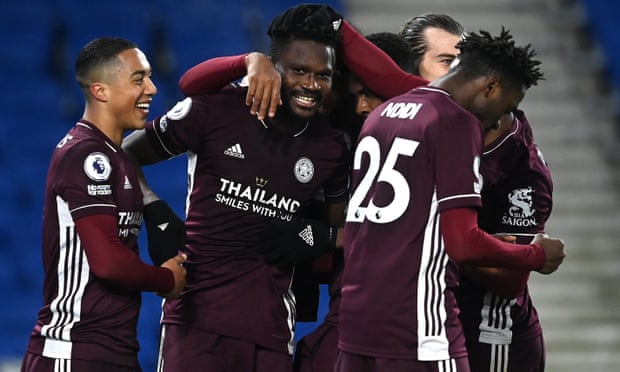 Ghana defender Daniel Amartey scored to Leicester City to a 2-1 triumph over Brighton and Hove Albion in the Premier League on Saturday.

The Seagulls had taken a first-half lead at the Falmer Stadium, nevertheless, Amartey and Nigerian  Kelechi Iheanacho found the net in the second half to inspire the Foxes to victory.

Graham Potter’s men came into the English Premier League tie with the ambition of ending their poor streak, while visitors were aiming to brighten their Champions League ambitions.

Ten minutes into the game, Adam Lallana put Brighton ahead after profiting from an assist from Neal Maupay. Having won the ball back from a Leicester throw-in, Maupay did well by holding off the challenge of a couple of defenders, flicked the ball through to an unmarked Lallana, who slotted the ball past Kasper Schmeichel.

That goal was a reality check for Brendan Rodgers’ men who bounced back from their slumber, albeit, were unable to put the ball past Robert Sanchez.

Before the interval, the hosts had two chances to double their advantage, with Lallana first glancing a header against the post and then Maupay’s effort was ruled out for offside.

The King Power Stadium giants got the second half off to a promising start with Iheanacho smashing into the side-netting after getting a pass from Timothy Castagne.

Their doggedness paid off in the 62nd minute after the Nigerian controlled a Youri Tielemans pass before lifting the ball past goalkeeper Sanchez.

With that strike, the former Manchester City wonderkid has now scored in each of his last two English top-flight appearances, having netted in just one of his previous 17 in the tournament.

Three minutes from full-time, Ghanaian star Amartey sealed the win from Marc Albrighton’s assist for his second ever Premier League goal, and first in 1540 days since netting against Stoke in December 2016.

After a notable shift, man-of-the-match Iheanacho was substituted for Hamza Choudhury in the 90th minute, while his compatriot Wilfred Ndidi and Amartey played from start to finish.

Saturday’s result takes Rodgers’ team up to second on the log, while Brighton are in a battle at the bottom, as they remain just three points above the relegation zone.

DISCLAIMER: The Views, Comments, Opinions, Contributions and Statements made by Readers and Contributors on this platform do not necessarily represent the views or policy of Multimedia Group Limited.
Tags:
Daniel Amartey
Leicester City
Premier League