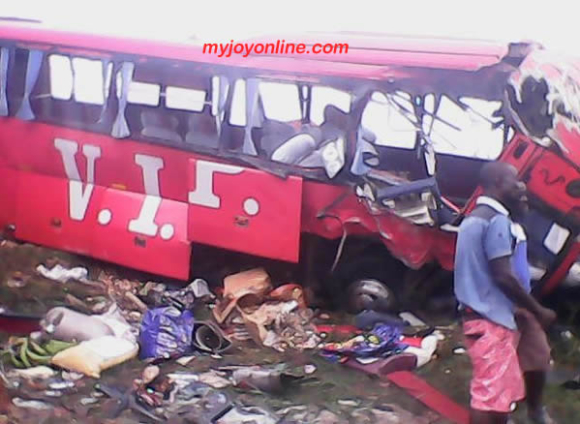 An accident at dawn on Friday involving two passenger buses at Ankaase, near Osino in the Eastern region has left nine dead and several others injured.

One bus heading to Accra from Kumasi and the other heading to Kumasi from Accra collided head-on after the Accra-bound bus overtook a stationary cargo vehicle on the road.

The driver and mate on the Kumasi-bound bus died on the spot. The other driver was badly injured below the waist.

An eyewitness and a security man, Amadu Abdulai, who spoke to myjoyonline.com said the accident happened around 1:23am.

He said a woman who was flung from one of the buses landed on him, screaming the name of her relative ‘Naomi’!

The two buses fell on either side of the road – a testament to the extent of the impact.

The dead, some of them found under the badly damaged buses, have been retrieved.

Ambulance services arrived on the scene to convey the dead and the injured to the Nkawkaw government hospital, and other health facilities in Kyebi and Osino.