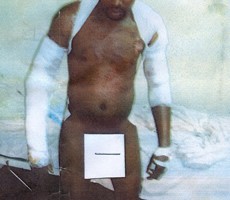 Three more persons have been confirmed dead from Friday’s premix fuel tanker explosion at Axim in the Western region.

This increases the death toll to seven. The three were part of seven victims flown from the Effia Nkwanta Regional hospital to the Korle-bu Teaching Hospital after sustaining severe burns from the explosion.

Hospital authorities say they cannot guarantee the lives of the remaining four.

According to him, the victims are suffering from 65-90 percent burns which are difficult to treat with the facility they have at the moment.

He said they need an intensive care unit to be able to treat such expensive burns.